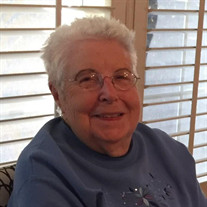 Andree Raynes left her earthly life on July 13, 2021. Andree was preceded in death by her husband, Earl Raynes, who had loved and cared for her for most of her adult life. Andree was also preceded in death by her son, Gabriel Raynes; stepson, Bill Raynes; and great-granddaughter, Dorothy McKay. Andree was born on February 28, 1929, in Saint Jean d’Angely, France. Andree’s parents, Bassyly Guyrassinoff, Marguerite Brun also preceded her in death. Andree met and married Earl while he was serving in the United State Army in Rochefort-sur-Mer, France. They both loved to dance, and Andree shared with Earl her memories of what her world had been before the war. After their marriage and at the end of Earl’s assignment in France, they moved to the United States with children, Gabriel, Michel (Ruben) and Dorothee. Andree and Earl had a new life to build for their family. Andree was a renowned cook and homemaker, focused on raising her family. Everything about Andree was beautiful; her home was beautifully decorated in the French style she loved as well as the many flower arrangements and skillfully crocheted afghans she created. Andree herself was a match to her beautiful surroundings; lovely to start with, Andree was always impeccably dressed, coifed and made up. Andree was known for her ready smile and sense of humor; one young relative referred to her as “a delightful woman”. Andree and Earl had become fast friends with the neighbors, Gloria and Walt Johnson, who also preceded Andree in death, and neighbors, Charlie and Gladys Deskin who continued to be her faithful friends until her demise. Andree and Gloria had been very active in St. Andrews Presbyterian Church in Brookside. They often put together fundraisers and trips with members of the congregation, supporting the church, the congregation and their Morning Circle. This fellowship meant so much to Andree. Andree is survived by a son. Michel Ruben Raynes (Kim); a daughter, Dorothee Hatcher (Gerry); a step daughter, Joanne McKay; grandchildren: Elizabeth McKay, Aaron McKay (Mimi), Tom McKay, and Robert McKay (Esther), Somers Reeves (Arron), Rebecca Hatcher, David Hatcher, Sarah Adkins (Chad), and Mara Runne (Michael) and great-grandchildren: Lily McKay, Jude McKay, Milo Runne, Wilder Reeves and Emmeline McKay. Services will be private. Donations may be made in Andree’s memory to the Alzheimer’s Association, 399 Market St., Ste. 102, Philadelphia, PA 19106. To send an online condolence, visit www.stranofeeley.com

The family of Andree Raynes created this Life Tributes page to make it easy to share your memories.

Send flowers to the Raynes family.