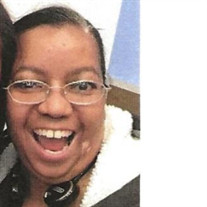 Angela Denise Adams died Thursday the 28th of January, 2021 at 1:40 pm at Seasons Hospice Care atop Christiana Hospital following a preventive surgical procedure that left her in a coma-like state on the 12th of January. The family thanks the Nursing staff, Doctors, and Social Workers for the heartfelt intimate care and support shown to them during this battle. On the 20th at 1 pm, in a meeting with Angela's team, the family got the news that Angie experienced a "Watershed Stroke" on the operation table and became terminal. No eyes were dry in that meeting. Angela's eldest sibling Debra (an out of towner) was then allowed to join in the visits to say goodbye. On the 25th of January, life support was removed, but Angela fought on and was moved to Seasons Hospice Care where she finally took the nap she so desperately deserved. Being the daughter of the late Betty and James Clement of Beckley, West Virginia, she leaves behind her siblings: Debra Rowland, Linda Kyle, Robert and Joseph Clement. Her brother, Jimmy Clement preceded her in death. Angela married Michael Adams of Newark, Delaware, after he chased her down in Santa Ana, California. They married after returning to Newark, 27 years ago. This union of love and respect produced their beautiful daughter, Alegna Adams (Ally), which is Angela spelled in reverse. Angie's idea. Ally and Michael will remember Angela as a formidable, strong-willed, beautiful woman who loved life and family and held a strong respect for God and His gift to them. Angela was in love with nature and the outdoors. Whenever possible, she would get to the beach and become enveloped in the sounds - the crashing of the surf, the smell of the salt air, and of course the beach fries. She replicated that sound of the surf or rainfall most nights before falling off to sleep. Angie was a sponge for knowledge, and shared that trait with her partner in crime, our daughter Ally. Reading was a great passion of Angela's and the range of material was eclectic, from the Scriptures to poetry to Sherlock Holmes to different atlases of the world, she loved to soak in the words of each page (not Kindle), page, like she couldn't wait for the next one. Michael will always remember Angie's ability to attract people and have them do her bidding. Not in a bad way, she just had it. Angie was special - ask anyone that knew her. She was bubbly, smart, but kind, and full of love for her family. Angela thought it was important to be upfront and honest in her life lessons to our daughter, and I thank Angela for passing that mischievous spirit to her. We do not know of anyone who will not be saddened by the passing of Angela Adams. Her life was cut far too short, but we can be thankful that Angie is at peace. We all love her deeply. Services and burial are private. To send an online condolence, visit www.stranofeeley.com

Angela Denise Adams died Thursday the 28th of January, 2021 at 1:40 pm at Seasons Hospice Care atop Christiana Hospital following a preventive surgical procedure that left her in a coma-like state on the 12th of January. The family thanks the... View Obituary & Service Information

The family of Angela Denise Adams created this Life Tributes page to make it easy to share your memories.

Send flowers to the Adams family.