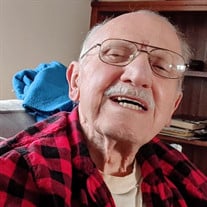 Anthony “Tony” Joseph Lepore passed away on Monday, November 15, 2021 at the age of 88. He was born on February 24, 1933 to Rose “Grey Head” Marano and Anthony Lepore and was raised in Wilmington, Delaware. He was one of five siblings, the others being Matthew, John “Skinny”, Rosemary “Mary”, Angela “Doll”, William “Billy”, Roseann, and Susan “Suzy”. There in Wilmington he met and grew up with who would eventually become his future wife, Eleanor “Snookie” Rittenhouse and her family. Tony joined the Air Force at a young age and spent his next 37 years in service to the military as a mechanic and firefighter, then later a technician for the Army- among his favorite vehicles to work on was the Bell UH-1 Iroquois “Huey” helicopter. He and Eleanor moved around for his work, eventually settling back in New Castle and he finished out his last years there working at the New Castle Air Force Base, also serving as a firefighter. It was at this time that they settled into the neighborhood of Stockton, where they raised their children Anthony “Tony” Jr and Valerie, as well as opened up their home to who would eventually become their son-in-law, Daniel “Dan” Burroughs. Following his retirement from the military, he began working at St. Thomas Episcopal church in Newark as a custodian for another 16 years, with occasional help from volunteers in the form of his wife and granddaughter. He himself was a parishioner of Our Lady of Fatima Catholic Church in New Castle, Delaware. Aside from his military and church interests, he was well-known for his love of animals and all things nature. Tony spent every day he could caring for and spending time with animals, be it taking in many rescue pet dogs, cats, rabbits, or rodents, or caring for the birds, squirrels, frogs, turtles, and street cats of the neighborhood. He also loved to spend time in nature, especially to fish, with his whole family and in his younger years would take annual crabbing trips to the beach with his wife, daughter, son-in-law, and granddaughter. He regularly donated to a great number of charities, especially those that benefitted animal rescues, conservation, veterans, and chronic illness research. He was also a lover of sports and a dedicated Phillies fan, an avid casino goer, and to many’s surprise, a fan of musicals, especially Les Miserables. Tony is predeceased by his siblings, wife Eleanor, and sons Tony and Garry. He is survived by his daughter Valerie and her husband Dan, his granddaughter Sarah and her husband Kyle, granddaughter Amanda, niece Rosemary, nephew Shawn, and many more extended family, as well as his cat Bill. At his request, he will be cremated and out of respect for his favorite holiday season, a service will be held at the Delaware Veterans Memorial Cemetery in spring 2022. In lieu of flowers, the family asks that memorial donations be made to the Delaware Veteran Awareness Center or to your local animal shelter.

The family of Anthony "Tony" Lepore created this Life Tributes page to make it easy to share your memories.

Send flowers to the Lepore family.