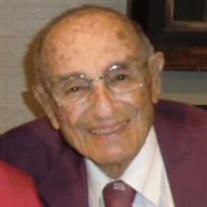 Arthur Nersasian, age 96, of Wilmington, Delaware went home to be with his Lord and Savior on September 10, 2020. Born in Salem, Massachusetts to the late Nelson and Mary (Ogasian) Nersasian, he grew up in New England and learned the value of hard work, strength of family, and devotion to God. Arthur enlisted in the chemical warfare unit of the U.S. Army in World War II. He served as a radio repair technician in the Asiatic Pacific Theater. After the war, Arthur married the love of his life Grace Russell on December 21, 1946. Arthur completed his undergraduate degree at MIT and was a cofounder of Intervarsity Christian Fellowship which was the very first religious group ever allowed on its prestigious campus. He went on to earn his PhD in Organic Chemistry at the University of Michigan He moved to Delaware in 1954 where he began a successful career with the DuPont Company, working at Chambers Works, the Experimental Station, and Chestnut Run. He was a member of the American Chemical Society for over 50 years and a member of Alpha Chi Sigma (honorary A.C.S) and a member of the Society of Automotive Engineers. He was proud to hold many patents through the DuPont Company. His research resulted in the adoption of DuPont’s “Vamac” by General Motors as the first lifetime seal of wheel bearings which eliminated the need for lubrication. He lectured to automotive companies in Europe, South America, Japan, and the USA. After 34 years, Arthur retired from DuPont with the title of “Senior Automotive Consultant” representing Viton R fluorohydrocarbon Elastomers. Arthur was very active with family, church, and civic activities. He was ordained an elder in Faith Presbyterian Church (Wilmington, DE) which established Covenant Seminary, later located in St. Louis, MO. He served for 3 years as chairman of the board of directors at Wilmington Christian School when it was located at the Chamber’s estate on Lore Avenue. He also volunteered at Brandywine Creek State Park. After retiring from Dupont, he and his wife, Grace, moved to Florida in 1987 and formed many new friendships. They were active at Seven Rivers Presbyterian Church in Lecanto, FL and cohosted a Bible study group in their home. He faithfully led Bible studies and taught Sunday school for over 60 years. Arthur and Grace cofounded the “Friends of Fort Cooper” a citizen support organization of volunteers where Arthur served actively from 1987 until he returned to Wilmington in 2019. Arthur’s greatest joy was time spent with his wife, children, grandchildren and great grandchildren. Over 60 summers of family vacations were enjoyed at Lake Winnipesaukee in New Hampshire. Arthur enjoyed fishing and spending time outdoors. This devout man of faith leaves a legacy of love, service, and excellence to the family and friends who will miss him dearly. Arthur is survived by his children: Arthur R. Nersasian (Debra), Deborah N. Whitlock (Keith), and Rick Nersasian; his brother, Robert Nersasian; his grandchildren: Amanda (Greg) Sheets, Keleigh (John) Fimmano, Mark Nersasian, Rick Whitlock, and Amy (Sean) Lamb; great grandchildren: Gavin, Zoe, Tacy, Faith, and Joy; nieces, nephews and friends. Arthur was preceded in death by his beloved wife, Grace Harriett Russell Nersasian; and siblings: Anne, Aram “Sparky”, and Rose. Family and friends are invited to a celebration of Arthur’s life on Wednesday, September 23, 2020 at 3 PM at the Strano & Feeley Family Funeral Home, 635 Churchmans Rd., Newark, DE 19702. In lieu of flowers, the family requests donations be made to either Sunday Breakfast Mission (www.sundaybreakfastmission.org) or Seven Rivers Presbyterian Church Memorial fund (www.sevenrivers.org). Arthur will be laid to rest alongside his wife at the Florida National Veterans Cemetery in Bushnell, Florida. For directions or to send an online condolence, visit www.stranofeeley.com

Arthur Nersasian, age 96, of Wilmington, Delaware went home to be with his Lord and Savior on September 10, 2020. Born in Salem, Massachusetts to the late Nelson and Mary (Ogasian) Nersasian, he grew up in New England and learned the value of... View Obituary & Service Information

The family of Arthur Nersasian created this Life Tributes page to make it easy to share your memories.

Send flowers to the Nersasian family.