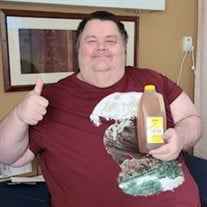 Barry Brown, age 63, went to be with the Lord Monday, December 27, 2021. Barry was born May 9, 1958, in New Castle, DE, the youngest of six. His nieces and nephews were just a few years younger than Barry. He would get so angry being called Uncle Barry by the eight nieces and nephews closest to his age. Barry worked at many jobs over his lifetime. His work experiences were electrical, mechanical, anything he could take apart, then put back together, just to prove he could. He had to see how it worked. Everywhere he worked gave him an opportunity for learning. Barry worked in a paint factory mixing paints, in a machine shop as an apprentice, in the shipping area at DuPont, and in the Miami Dade Hospital where he spent his lunch hours reading the PDR (Physician's Desk Reference) at the nurses’ station. He and his best buddy, John, worked with computers, sold cellphones, and worked as bail bondmen. Barry loved Bob Marley who was from Wilmington. He worked for months on the first Bob Marley Festival. Barry also had his own printing company, Busy Bee. When asked how to characterize Barry, the responses were varied but they all referenced his humorous personality and infectious laughter. He was a great character with character. Barry was a practical joker, always wanting to prank someone. In his past few years in the nursing home, he was the "life of the party" to the other residents with his laughter after the joke. Barry also had a big heart – someone who would give you his last dollar and stand up for his friends. He was always praying for others. Barry carried a small book he could put in his pocket. He would ask anyone he met, "Can I pray for you? Write your name in my book and I will pray for you." Barry’s unending enthusiasm and eternal optimism will be greatly missed. Barry is survived by his sisters: Sandra VanKirk (Mike), Roberta Bickelman (Bob), and Barbara Grant; brother, Bill Brown (Elaine); best friend, John Purnell; and former wife, Dee Gayle Brown. He was preceded in death by his parents, Clyde Sr. and Edith Brown; and brother, Clyde Brown, Jr. A visitation will be held Thursday, January 13, 2022, from 2-3 PM at Strano & Feeley Family Funeral Home, 635 Churchmans Rd., Newark, DE 19702 followed by a service in celebration of Barry’s life at 3 PM. Burial will be private. For directions or to send an online condolence visit www.stranofeeley.com

Barry Brown, age 63, went to be with the Lord Monday, December 27, 2021. Barry was born May 9, 1958, in New Castle, DE, the youngest of six. His nieces and nephews were just a few years younger than Barry. He would get so angry being called... View Obituary & Service Information

The family of Barry Brown created this Life Tributes page to make it easy to share your memories.

Barry Brown, age 63, went to be with the Lord Monday, December...

Send flowers to the Brown family.