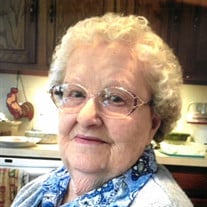 Beulah Hypes Dalton was born on March 31, 1921 in Itmann West Virginia. Her parents were Cora and William Hypes. Her father died when was 3 years old. Beulah’s aunt, uncle and grandfather helped her mother raise her and her brother James while they lived on a farm in the mountains. Some of her favorite memories about her childhood that she shared with us were: Her uncle Jerry taking her to school on a horse and handing her to the teacher and her feet never touching the snow. Another memory was her brother and her racing the work horses down to the creek to water them. She talked often about sitting on the front porch in the evening with her family. They had to have a lantern on because there was no electric in the house. Beulah’s mother remarried years later so she got 2 half-brothers, John Wesley and Gene Dalton. Her future husband Arthur Kyle Dalton served in the Army in WW2. During the war Beulah was a Rosie Riveter welder at the Wilmington, DE ship yard. Her favorite thing to do with her friends on their day off was to go and eat Chinese food at a local restaurant. Beulah also worked at an ammunitions plant in North East, MD. The women all stayed together at Sandy Cove. After the war Beulah and Kyle got married in Bluefield, Virginia. They had a son Wayne Albert, that was born at home. Kyle had a son name Raymond from his first marriage. Kyle and Beulah had a Gas Station/Store. Kyle also worked in the coal mines. To get Kyle out of the coal mines they moved to Delaware. While in Delaware Ruth Sharon was born. Beulah was a full-time mother. Beulah enjoyed her 5 grandchildren Amy, Robert, Rebecca, Jeremy, and Ryan. All 5 of them spent the night often with her. The morning after breakfast was 2 dozen eggs and 2 packages of bacon. During the summer she enjoyed the family sitting out on the porch while she watched the grandchildren play in the yard. She often had them walk behind her in the basement as she did her daily walk. Beulah also enjoyed 12 Great Grandchildren, Becara, Bobby, Naomi, Joel, Autumn, Geneva, Aurora, Chase, Collyn, Willow, Wren, and Winter. The Great Grandchildren found all the snacks that they could ever want while visiting her. They also enjoyed the toy boxes she kept in the living room. Beulah loved her daughter-in-law Kathi and son-in-law Bob. Throughout her life Beulah enjoyed her family. She cooked many Sunday dinners and loved to sit and talk with all the family. She always was willing to lend a helping hand. As a Christian, Beulah enjoyed her 43 years going to Ogletown Baptist Church. Her ministry was calling ladies on the phone that needed a phone call. In 1986 Beulah took the challenge from Pastor Otis Doherty to read the Bible thru in a year. She did it. She kept on reading it thru. She read it 40 times before she went to Heaven. Beulah always ate a apple a day and drank lots of water. She was 100 years young when she went to Heaven to see Jesus. Beulah will be missed by all that knew her. Those that see her in Heaven will call her name and here her say, “woo-hoo”. Relatives and friends are invited to the viewing on Wednesday, August 25, 2021 from 10 to 11 AM at Ogletown Baptist Church. 316 Red Mill Road in Newark, where a service will be held at 11 AM. Interment will follow at Gracelawn Memorial Park in New Castle. In Lieu of flowers you can donate to, Blind Sight Delaware (302)998-5913, 2915 Newport Gap Wilmington, DE 19808.

Beulah Hypes Dalton was born on March 31, 1921 in Itmann West Virginia. Her parents were Cora and William Hypes. Her father died when was 3 years old. Beulah&#8217;s aunt, uncle and grandfather helped her mother raise her and her brother James... View Obituary & Service Information

The family of Beulah Hypes Dalton created this Life Tributes page to make it easy to share your memories.

Send flowers to the Dalton family.