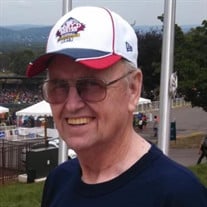 Carl Edward Page, age 81, of Newark, DE, passed away Thursday, November 4, 2021. Carl was a proud veteran of the US Air Force. Some of his most retold memories were of those years in Mountain Home, Idaho and his adventures in states including Texas, California, Utah and Wyoming. The Air Force baseball team (Carl found a team everywhere he went) traveled extensively. He even got his first driver’s license while in Idaho. After fulfilling his service, Carl returned to southeastern Pennsylvania, where he spent his childhood. He had multiple opportunities and chose a position with Tidewater in Delaware City (later Getty Oil). He spent seventeen years at Getty playing ball on their team almost as much as he worked. He left Getty to work for over six years in Saudi Arabia. Ultimately, he spent nearly fifty years in the oil and gas industry in places ranging from North Carolina and Ohio to St. Croix and Venezuela. Carl enjoyed watching college sports and had that lifelong love of baseball. When he wasn't playing, he'd find a game to attend in person. This led to one of his unique abilities - almost everywhere he went he'd run into someone he knew from Marcus Hook or the surrounding area, usually somehow related to baseball. He married Faith Biddle in 1967 and they made Delaware their home. They enjoyed traveling. He had seen much of our country before he had children. Once a father, he worked hard to show his family how much there was to see and learn beyond Delaware. From early trips driving to Niagara Falls or Disney World to the famous winter trip to California just in time to miss the blizzard of '78, to adventures later throughout Europe and the U.S., the family deeply cherishes the memories he and Faith made possible. Always a hard worker, even in retirement Carl kept active with part-time jobs where he made many friends. He worked security on corporate and residential contracts, but his favorite position was managing the office supply needs for WL Gore sites in MD, PA and DE. Even when companies lost the Gore contract, Carl would immediately be picked up by the next vendor to ensure the service at Gore didn't miss a beat. He was disappointed to lose touch with everyone there once COVID shut down in-person work. Carl's favorite non-work pastime was playing the slots at Delaware Park. Carl is survived by his children: Debbie Dunford, John Page (Deborah) and Dana Page (Mark) and grandchildren: Elizabeth, Alexander, Austin, Justin, and David. He was preceded in death by his wife of forty-seven years, Faith Biddle Page; his parents, Robert and Louise Page; and his three siblings. Burial will be private. In lieu of flowers, a donation in Carl's name can be made to www.stjude.org or to www.woundedwarriorproject.org. To send an online condolence, visit www.stranofeeley.com Strano & Feeley Family Funeral Home 302-731-5459

Carl Edward Page, age 81, of Newark, DE, passed away Thursday, November 4, 2021. Carl was a proud veteran of the US Air Force. Some of his most retold memories were of those years in Mountain Home, Idaho and his adventures in states including... View Obituary & Service Information

The family of Carl Edward Page created this Life Tributes page to make it easy to share your memories.

Send flowers to the Page family.