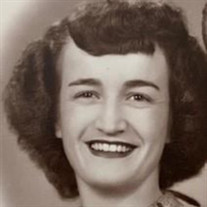 Heaven gained an angel in the early morning hours on Tuesday, October 6, 2020. Cecilia (“Ceil”) Jordan Riofski passed peacefully in her sleep. Born in Berwick, Pennsylvania, on February 27, 1925, she was the daughter of the late Joseph and Virginia (Scrivani) Jordan. Ceil graduated from Berwick High School, where she was an honors student and a cheerleader. She was awarded a scholarship after winning a writing competition and was offered employment in Washington DC, however her father refused to allow her to travel. She married John Gordon Riofski of Wilkes-Barre, on April 10, 1948. They moved to Wilmington, Delaware where John worked for General Motors in Safety and Ceil for DuPont as an administrative assistant for 5 years. She then became employed as an administrative secretary for Red Clay and Colonial School Districts for 20 years. so that she could have a schedule that allowed her to be with her children after school. She was a volunteer for Little Sisters of the Poor and was dedicated to their mission and values of reverence, family spirit, humble service, compassion and stewardship. She also compassionately volunteered for Saint Francis Hospice and worked part time for Cal’s Hallmark where she found joy assisting her customers in choosing special cards and gifts and taking time to wrap each one with love and care. Helping others brought her tremendous joy. Following the untimely death of her husband of 32 years in 1980, she became an active member of Post Cana. This church group of widows and widowers was where she eventually met Anthony Falkowski, a special friend and companion for 15 years. They found comfort in each other’s company and shared their love of music, dance, gathering with friends, volunteering and travel. Ceil led the Post Cana Sunshine Committee and organized the celebrations of members’ birthdays by bringing balloons, special gifts and flowers to their homes. She also assisted in the day to day chores of some of the elderly members that were ill or homebound. She helped plan trips to Williamsburg, Hawaii and Wildwood where the Post Cana gang would spend time together. When Ceil was not volunteering or planning trips, she could be found with her “girlfriends” at Delaware Park Casino playing the slots and having lunch or on a Post Cana bus trip to Atlantic City. She was full of fun and was a great organizer and planner. She always said, “A busy mind is a happy mind” and she most definitely kept busy! Ceil touched so many lives and was a friend to all. She was kind, compassionate, caring and generous. She was known to strike up a conversation in a grocery line or at her grandchildren’s soccer or lacrosse games and become involved in community activities with her neighbors at her home on 402 Victoria Avenue where she lived for 57 years, never wanting to move as it was the home that she had made with her husband. Ceil took pride in maintaining her gardens and keeping the lawn meticulously groomed as well as hanging a seasonal wreath on the door each and every year. She continued to live in that home until age 95 and cherished the memories it held. She is survived by her two daughters, Deborah Riofski DiPasquantonio of Wilmington, and Maribeth Jordan Bossbaly and her husband, José of Yardley, Pennsylvania; five grandchildren: Bryan (Angie), Jonathan, Stefan (wife Abigail), Alyssa and Julian; her sisters-in-law, CeCe (wife of brother Gerard) and Doris (wife of brother Louis); as well as several wonderful nieces and nephews. She was preceded in death by her husband, John Gordon Riofski; three sisters: Joanna (Jennie) Jordan Scheno, Della Jordan Ceglarski and Virginia (Jean) Jordan Riofski; and six brothers: Theodore (Teddy), Carl, Joseph Jr. (Josie), Louis (Louie), Alex, and Gerard (Doc). A Mass of Christian Burial will be held on Thursday morning at 11 AM at Saint Anthony’s of Padua, 901 N. DuPont Street. Wilmington 19805. Burial will be at All Saints Cemetery, 6001 Kirkwood Highway, Wilmington 19808. In lieu of flowers, the family requests donations to Little Sisters of the Poor of Delaware, 185 Salem Church Rd, Newark, DE 19713 (mail donations) or use the link https://littlesistersofthepoordelaware.weshareonline.org/ws/opportunities/MemorialHonorofGift Arrangements are under the direction of Strano & Feeley Family Funeral Home, Newark, DE. For additional information, or to send online condolences, please visit www.stranofeeley.com

Heaven gained an angel in the early morning hours on Tuesday, October 6, 2020. Cecilia (&#8220;Ceil&#8221;) Jordan Riofski passed peacefully in her sleep. Born in Berwick, Pennsylvania, on February 27, 1925, she was the daughter of the late... View Obituary & Service Information

The family of Cecilia J. Riofski created this Life Tributes page to make it easy to share your memories.

Heaven gained an angel in the early morning hours on Tuesday,...

Send flowers to the Riofski family.