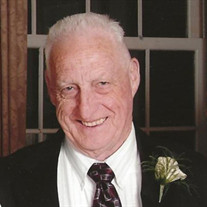 .Charles E. Jones “Corky” age 88, of New Castle, DE, went home to be with the Lord on Monday, April 11, 2022. Born in Eddystone, PA, on May 26, 1933, Mr. Jones was the son of the late Isaac Jones and Grace Altman. He retired in 1995 from Diamond Shamrock (which became Occidental Chem). Mr. Jones previously had worked at Phoenix Steel in Claymont, DE. Corky was a well known taxidermist which he loved doing all his life. Many people have enjoyed the Blue Claw Mounted Crabs - not to mention the peacock, moose head, fish and countless deer heads. He was a member of Fairwinds Baptist Church. Mr. Jones is survived by his four children: Lori Cardenti (Michael) of Middletown, Mike Jones (Lorrie) of Denver, CO, Tracy Libetti of New Castle, and Ted Jones (Kathy) of Arlington, TX; 16 grandchildren; and 30 great-grandchildren. He was preceded in death by his wife of 50 years, Diane (Chris) Christian; his oldest son, Richard (Rick) Charles Jones; three brothers: Ibby, Bill, and Dicky; and his three sisters:, Ruth, AnnaMae, and Delores. A visitation will be held Friday, April 22, 2022, from 10-11 AM at Fairwinds Baptist Church, 801 Seymour Re., Bear, DE 19701 followed by a service in celebration of Mr. Jones’s life at 11 AM. Burial will be private and at the convenience of the family. In lieu of flowers, donations may be made to the National Fish and Wildlife Foundation, 1133 15th Street NW, Suite 1000, Washington, DC 20005. For directions or to send an online condolence visit www.stranofeeley.com

The family of Charles "Corky" E. Jones created this Life Tributes page to make it easy to share your memories.

Send flowers to the Jones family.