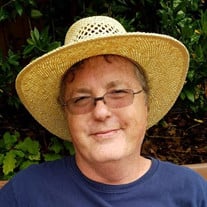 Charles “Chuck” Fasterling, age 60, of Colora, MD, went home to be with the Lord on March 30, 2021. Chuck served in the United States Air Force and then later went on to work as a manual machinist. He loved everything to do with science, computers, and technology. Chuck was a very curious person and liked to educate himself with the latest in science and technology. He watched various science shows, along with the Syfy and Discovery networks. Chuck enjoyed spending time assembling and flying RC planes. His many other hobbies were fishing, camping, and being a scout leader for his son when he was in the Cub Scouts. Some of his favorite places to camp were Splash Magic, Knoebels, and Harper’s Ferry. Though he never got to visit, he always talked about the Great Smoky Mountains. During football season Chuck would root for his teams, LSU and Saints. Chuck loved to sing and was a member of White Clay Presbyterian Choir. He was always up for some good food, especially crawfish. One of his favorite dishes was Bear’s roast beef Po’boy from Covington, LA. Chuck was always happy and loved when he was able to spend time with family and friends. Chuck and his wife, Roxanne, met 24 years ago the old fashioned way, in a bar in Baton Rouge, LA. They have been married for 21 years and later moved to Maryland in 2001. Chuck is survived by his wife, Roxanne Sturdy; son, David James Fasterling; step-son, Brian Jarreau (Dr. Magdalena Budziakowska); sister, Marie Alfred of Lafayette, LA; sister-in-law, Karen Yarnall and family; and nieces and nephews: John B. Fasterling the V, Jill Fasterling Martin, and Lyall Alfred (Erin Hardaway Alfred). Chuck was preceded in death by his parents, John and Barbara Fasterling; and brother, John B Fasterling the IV. Services to be announced. To send an online condolence please visit www.stranofeeley.com.

Charles &#8220;Chuck&#8221; Fasterling, age 60, of Colora, MD, went home to be with the Lord on March 30, 2021. Chuck served in the United States Air Force and then later went on to work as a manual machinist. He loved everything to do with... View Obituary & Service Information

The family of Charles "Chuck" Fasterling created this Life Tributes page to make it easy to share your memories.

Send flowers to the Fasterling family.