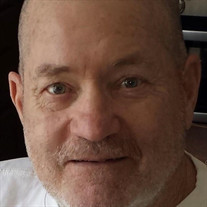 Charles (Chuck) Joseph Manlove, Jr., age 68, of Middletown, DE, passed away peacefully after a long battle with MSA on January 6, 2021. He leaves behind his dear wife Ann (nee Kossek) of 34 years, and children Jessica and Thomas; his sisters Christine (Jack) and Kathryn (Richard), and two brothers James and Joseph (Kelly). He was predeceased by his brother Michael (Denise) and his parents Theresa and Charlie. Also mourning Chuck are nieces, nephews, cousins, aunt, and many friends. Chuck was raised in Wilmington and lived his adult life in and around Wilmington. He was a foreman with the Ironworkers Local 451, working most of his career for East Coast Erectors. Chuck’s many physical activities included golf, skiing, backpacking, skydiving, hunting, and fishing. Some of his other interests were relaxing on the beach with his wife—though no swimming (!), watching all football teams—especially his Raiders, cooking BBQ and in chili cook-offs, playing horseshoes and cornhole, performing magic tricks, and solving those manual puzzles that no one else could figure out. He was very competitive in many of these activities, and especially when it came to horseshoes, which he loved to play with his father-in-law, Frank Kossek. Chuck also had a great memory and knew interesting things about a variety of subjects. Chuck was widely known for his sense of humor. With his quick wit, he delivered spontaneous one-liners with a straight face. Chuck loved his grandpuppy Riley, the companion who kept him company, especially during the long days of his illness. It is hard to put into words how much Chuck loved Riley. Not enough can be said, however, about the love and care that Chuck received from his wife Ann, especially daily during these many months of the pandemic. The family wants to thank Kim (speech therapist), and Aimee and Angela (physical therapists) for their excellent care for the last six months. In lieu of flowers, the family asks that donations be made to Make a Donation | Parkinson's Disease (michaeljfox.org). A private viewing will be held. However, a celebration of life will be planned for a future date when family and friends can gather to tell stories, laugh, and remember this man we loved. May the Lord embrace Chuck in His heavenly arms.

Charles (Chuck) Joseph Manlove, Jr., age 68, of Middletown, DE, passed away peacefully after a long battle with MSA on January 6, 2021. He leaves behind his dear wife Ann (nee Kossek) of 34 years, and children Jessica and Thomas; his sisters... View Obituary & Service Information

The family of Charles Joseph Manlove Jr. created this Life Tributes page to make it easy to share your memories.

Send flowers to the Manlove family.