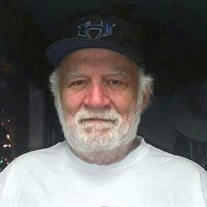 Charles W. Muntz, age 76, of Newark, DE, passed away peacefully at his home on August 21, 2020. Originally from Southern New Jersey, Charles graduated from Paulsboro High School in 1960. Following graduation he enlisted into the United States Army. He was a proud Veteran who often shared his experiences with his family of his time stationed in Panama. Following his time in the Army, he was employed at the Altas Point plant for 37 years where he had numerous roles, most notably as a Powerhouse Operator. He truly enjoyed the camaraderie he had with his fellow co-workers over the years. It was here where he met his loving and caring wife Deborah, with whom he was married to for 40 years. Charlie was an avid sports fan. He loved watching the Eagles, Phillies, and Nebraska College Football, but his favorite pastime was watching Flyers hockey games on TV with his wife Deborah. He loved a variety of music and movies, especially Mobster Movies and Turner Classic Movies. He had a passion for Art. He loved to sketch portraits, and later in life developed a love for painting landscapes. The one thing that made him most proud was talking about all his children and grandchildren. He was a beloved husband, father, grandfather, great-grandfather, friend and neighbor. Charles was preceded in death by his parents, Lawrence and Gladys Muntz; and his daughter, Wythena Fleming. He is survived and will be dearly missed by his wife of 40 years, Deborah Muntz of Newark, DE; his daughter, Valerie Matteo (Thomas); his daughter, Jennifer Robinson (Rondie); his son, William Muntz (Kendra); his son, Christopher Muntz (Kara); his son, Robert (BJ) Muntz (Amber); and his daughter: Amanda Muntz. Charles had 10 grand-children; Brittany, Dakota, Dominic, Kristina, Sara, Jacob, Elaina, Liam, Christopher, and Gabriel: and 4 great-grand-children: Wyatt, Keira, Jaxon, and Lucas, all of whom he loved dearly. Family and friends are invited to attend a visitation which will be held Monday, August 31, 2020, from 9:30-11 AM at Strano & Feeley Funeral Home, 635 Churchmans Road, Newark, DE 19702, followed by a funeral service at 11:00 AM. A Military Honors service will be held in the chapel at the Delaware Veterans Memorial Cemetery immediately following. For directions or to send an online condolence, visit www.stranofeeley.com

The family of Charles W Muntz created this Life Tributes page to make it easy to share your memories.

Send flowers to the Muntz family.