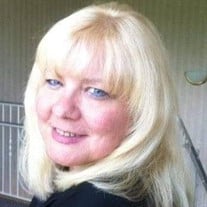 Christine “Chrissy” Elaine Poore-Kotash, daughter of Ginger Glynn and Jim Golden, peacefully passed away on January 15th, 2022. Christine was born on June 23, 1961, in Wilmington, Delaware. She was preceded in death by her grandparents, Andre Nadeau, Kathleen Light, Mr. and Mrs. James Golden; and her nephew Nick Golden. She is survived by her son, Donald Werts; and granddaughter, Jade Werts, who were her absolute pride and joy. She is also survived by her sisters, Debbie Zeccola (Kenny Wilkins) and Dee Anderson (Ron Anderson); and brother, Gary Golden. She will also be missed by her many nieces, grand-nieces, nephews, and grand-nephews; and longtime friend, Kim Lober. Christine graduated from Delcastle Vo-Tech High School, in 1979, with high honors in her degree of cosmetology. She followed her passion as a hairstylist as the Owner and Operator of her salon, “Christine’s Creations” for more than 20 years where she cared for and loved everyone who walked through her door. She continued living her dream in several different salons in the Stanton Newport area. Outside of her career, Christine loved to cook, especially recipes she found while watching her beloved cooking shows on TV. She was always ready to have a good time, especially with her family. She loved going to the beach, relaxing or fishing on the boat, going to the casino, and dancing. Christine was an amazing person inside and out, who battled her illness for over 9 years without ever complaining once. She will forever be remembered for the immense amount of compassion, bravery, and strength that she carried through to her final moments. A celebration of life will be held at a later date and in lieu of flowers, contributions may be sent to the Helen Graham Center in Christiana, Delaware. Christine, you were loved by so many, may you forever rest in peace, Lord knows you deserve it.

Christine &#8220;Chrissy&#8221; Elaine Poore-Kotash, daughter of Ginger Glynn and Jim Golden, peacefully passed away on January 15th, 2022. Christine was born on June 23, 1961, in Wilmington, Delaware. She was preceded in death by her grandparents,... View Obituary & Service Information

The family of Christine Elaine Poore-Kotash created this Life Tributes page to make it easy to share your memories.

Send flowers to the Poore-Kotash family.