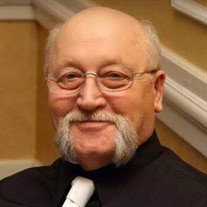 Conley J. “Tom” Markland, Sr., age 68, of New Castle, DE, went home to be with our Lord on Wednesday, January 12, 2022. Born in Fordtown, TN, on July 4, 1953, he was a son of the late Paul and Violet (Hensley) Markland. Tom proudly served his country in the US Marine Corps, rising to the rank of Sergeant. It was during his time in the military that Tom met the love of his life, and wife of 46 years, Linda. Together they raised 6 children - sons, Conley J. Markland, Jr. (Dawn), Douglas W. Markland, Sr., Charles Markland (Amy); daughters, Ashley Markland, Tina Markland-Andrews (John), and Theresa Estheimer - who will carry on his legacy of unconditional love. Tom was a dedicated employee of Printpack for 47 years, where he worked as an ink room supervisor. He attended Everspring Church and was a strong man of God; Tom was a true reflection of Christianity, love and grace. Tom was a devoted husband, father and pepaw. His family was always his first priority. In addition to his wife and children, Tom is survived by sisters, Betty Rosen, Irene Rees, Della Arnold, and Dovie McDow (Allen); brothers, Bobby (Mary), Greg, and Johnny Markland; 14 grandchildren; 7 great grandchildren, and a host of nieces and nephews. Along with his parents, Tom is reunited in heaven with his sister, Gayle Thompson, and his grandchildren, Tristan and Savannah Andrews. A Celebration of Life Memorial Service will be held on Friday, January 21, 2022 at 12pm at Everspring Church, 1701 S Dupont Hwy, St Georges, DE. Interment at Delaware Veterans Cemetery, with full military honors, will be private. In lieu of flowers, contributions may be made in Tom’s memory to the American Eagle Foundation in Pigeon Forge, TN (www.eagles.org) or to Everspring Church at the above address.

The family of Conley J. "Tom" Markland Sr. created this Life Tributes page to make it easy to share your memories.

Send flowers to the Markland family.