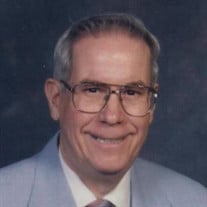 Cornillus Frank Nadeau, of Churchman Village in Newark, DE, passed away peacefully on November 12, 2020, at the age of 87. A native of Michigan, Frank grew up in River Rouge. He served in the U.S. Air Force during the Korean Conflict. After the war he was stationed in New Castle, DE where he met and married his first wife, Loretta. He worked for Diamond State Telephone and, after moving his family to Michigan, worked for Michigan Bell before retiring to New Port Richey, FL. He enjoyed many years in Florida with travels throughout the United States and cruises to the tropics and Hawaii. He took up genealogy during his retirement and did exhaustive research into his family tree. He gave many hours volunteering for his church. His second wife, Betty, passed away in 2016 after 40 years of marriage. He then returned to Delaware to be closer to his daughters. In addition to his wife Betty, Frank was predeceased by his parents, Jerome and Katherine (Van Wasshenova) Nadeau; two brothers, Charles (Rosemary) Nadeau, Jerome (Bonnie) Nadeau; five sisters, Marion (Frank) Vacjner, Angeline Nadeau, Annabelle Nadeau, Pauline Nadeau, Anna Marie (James) Blair; and a daughter, Phyllis Ann Nadeau. He is survived by three children: Michael (Sandra) Nadeau of Whitmore Lake, MI, Jean (Scott) Polsen of Landenberg, PA, and, Katherine (David) Skinner of Bear, DE; two brothers, George (Betty) Nadeau of Taylor, MI and Edward (Jo Ann) Nadeau of New Port Richey, FL; his beloved cat, Violet of Bear, DE and numerous nephews and nieces. He is also survived by his stepsons William (Carol) Schmidt of Denver, CO, and Ken (Deb) Schmidt of Chesterfield, MI and their children. Frank’s daughters want to thank the many caregivers who have looked after him over the past four years, especially the staff at Churchman Village, Homewatch Caregivers, and Right at Home. Due to COVID-19 restrictions, services and burial will be private. Memorial donations can be made to Faithful Friends, 12 Germay Dr., Wilmington, DE 19804. To send an online condolence, visit www.stranofeeley.com

Cornillus Frank Nadeau, of Churchman Village in Newark, DE, passed away peacefully on November 12, 2020, at the age of 87. A native of Michigan, Frank grew up in River Rouge. He served in the U.S. Air Force during the Korean Conflict. After... View Obituary & Service Information

The family of Cornillus Frank Nadeau created this Life Tributes page to make it easy to share your memories.

Send flowers to the Nadeau family.