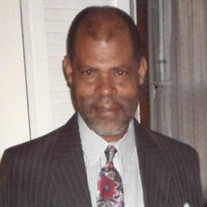 Celebration of Life for Courtney William Walcott Sunrise: February 6, 1938 - Sunset: November 19, 2021 God called Courtney William Walcott home on Friday, November 19, 2021. Courtney also known as “Alec or Walker” was born February 6, 1938, to Frederick Walcott and Myrtle Harvey in Kingston Jamaica. He was the eldest of 14 children. He attended Excelsior High School where he played with the Excelsior Sunlight Cricket team. After graduation, he worked at the University of the West Indies Registry and Bibari Automotive. He migrated to the USA, England, Canada, and back to the USA. In America, he worked in computer technology and data storage for years and with several companies such as E. F. Hutton, Mellon Bank and lastly, Fiserv. In 1986, he married Madge Farquharson who has been a loving and attentive wife and has been by his side to the end. After their retirements, they settled into their daily routine which included a Friday trip to the local Farmer’s Market. As a couple they were inseparable, it was rare to see one without seeing the other. Courtney was a humble, gentle, and knowledgeable man who lived by principles instilled in him from his youth. He loved spending time listening to music, watching cricket, talking politics, and solving puzzles. He is survived by his loving and devoted wife, Madge Walcott, children Leonie Golding, Neville Golding (Jacqueline), Garry Golding, Kenneth Golding, Dalphy Raby (Jennifer), Marjorie Walcott, Marcia Walcott, Jennifer Walcott, Frederick Walcott, Clyde Walcott, Sarah Walcott, Frederick Walcott, Clyde Walcott, Jacqueline Walcott, Debbie Walcott, eight siblings, several grandchildren including one he helped raise, Garrett, great-grandchildren, nieces, nephews, and a host of other loving relatives and friends. He was preceded in death by his parents Frederick Walcott and Myrtle Walker, siblings Oswald, Alfred, Doreen, Delphine, Walter, and son Barry. A visitation will be held Thursday, December 2, 2021, from 10-11 AM at Strano & Feeley Family Funeral Home, 635 Churchmans Rd., Newark, DE 19702 followed by a service in celebration of Courtney’s life at 11 AM. Burial will follow in Gracelawn Memorial Park. For directions or to send an online condolence visit www.stranofeeley.com Lovingly Submitted, The Family To view the webcasting please visit https://webcasts.lifetributes.com/1177044

The family of Courtney William Walcott created this Life Tributes page to make it easy to share your memories.

Send flowers to the Walcott family.