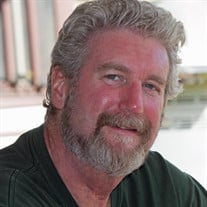 Dan J. Bennett, age 64, of Wilmington, DE, went home to be with the Lord on August 8, 2021, surrounded by his loving family and friends. Born on January 3, 1957, son of the late Earl R. and Carolyn E. Bennett of Wilmington, DE. Dan was both a loving husband and father to his wife of fifteen years Jessica Bennett of Wilmington, DE, and their children, Dan J. Bennett Jr. and Sophia L. Bennett. Dan had made many fond memories growing up with his family. He is survived by his brother David Bennett, and his wife Linda of Bear, DE. As well as his three sisters, Sheryl Parisan and her husband Ron of Elkton, MD, Sharon Harrison of Wilmington, DE, and Sandra Hazzard of Newark, DE. Dan enjoyed traveling, and after working thirty-eight years as a produce manager for Acme, Dan spent his retirement on cruise ships throughout the Caribbean, Disney, Universal, and many trips out west with his family. Dan had a love and calling for music and made many fond memories as a drummer for both Trinity FSG Christian Group and the Sons of Thunder. That everlasting passion and dedication fueled him through many road trips with his band mates and many concerts later in life. Although Dan enjoyed many genres of music, his favorites were both Christian and Classic Rock. Dan never let his diagnosis keep him down. He lived his life to the fullest, with a smile on his face and a thumbs up to the world. He had a gift to make friends with anyone he met and enjoyed celebrating the holidays with family and friends. Especially both Halloween and Christmas as they were his favorite. Throughout those special occasions, Dan could be found making forever memories with a camcorder in hand. He had a fascination with both history and anything sci-fi as Star -Trek was one of his favorites. His other enjoyments included being a loyal Eagles and Phillies fan as well as appreciating the wildlife in his backyard. He spent hours watching and recording the many birds and squirrels that would stop by for a visit. If we were to sum his life up in one sentence it would be this, Dan took life and everything thrown at him good or bad and made it his own, packed full of love. His happiness and joy for this world will continue through us, his family & friends. He often said, “Life can be short sometimes, make it count and have fun”. A funeral service will be held from 11am on Wednesday August 18,2021, in the chapel of Love of Christ Church, 2157 Bear Corbitt Rd, Bear, DE, 19701, where friends may call after 10am. Pastor Forrust Miller of Love of Christ Church will officiate.

Dan J. Bennett, age 64, of Wilmington, DE, went home to be with the Lord on August 8, 2021, surrounded by his loving family and friends. Born on January 3, 1957, son of the late Earl R. and Carolyn E. Bennett of Wilmington, DE. Dan was both... View Obituary & Service Information

The family of Dan J. Bennett created this Life Tributes page to make it easy to share your memories.

Send flowers to the Bennett family.