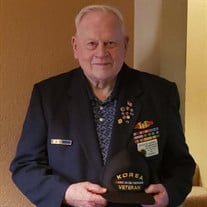 David Butler Carney, Sr., 90, of Newark, Delaware, passed away on Wednesday, March 30, 2022, at his home in Mesa, Arizona. The son of Margretta Emma Butler and Arthur Thomas Carney, he was born on September 30, 1931, in Blairsville, Indiana County, Pennsylvania. David served in the Army in the Korean War (1952-1954) as part of the 13th Battalion Combat Engineers. During his time in the Army, he received the Good Conduct Medal, Korean Service Medal with Bronze Star, United Nations Service Medal and the National Defense Service Medal. He was honorably discharged and had reached the rank of Sgt. David worked at the Delmarva Power and Light Company for 32 years as a Power Station Operator and retired in 1991. He had been retired for 31 years. He was a Life Member of: Veterans of Foreign Wars (VFW), American Legion (AL), Sons of the American Revolution (SAR), Sons of Union Veterans of the Civil War (SUVCW), United Methodist Men, Society of the Descendants of Washington Army at Valley Forge, Army/Navy Union – Garrison #65, North American Hunting Club, NRA, and was a Hunter Education Instructor in the Hall of Fame at the Department of National Resources in Delaware. He participated in the Annual Color Guard services in the Newark parade, Memorial Day Flag services and the Twin Bridge ceremonies. He was a Unit Commissioner in the Boy Scouts of America (BSA) and attended many of the National Jamborees in Virginia as the Shooting Coordinator. He provided and presented Eagle Court of Honor certificates to over 500+ Eagle Scout recipients and represented the VFW, AL, SAR and SUVCW in the presentations. He was awarded the BSA Silver Beaver Award and Volunteer Award for his more than 70+ years of service. David is survived by his sister, Eileen Bukowski; ex-wife, Donna K. Carney; his sons, David B. Carney II and Douglas B. Carney; his daughters, Denise J. Carney and Dyan K. Carney; his grandchildren: Douglas B. Carney (Tara), Alyssa Carney, Bambi Carney and Dylan Carney; and his great-grandchildren Douglas Carney and Austin Carney. He was an avid hunter and world traveler. He loved spending time with all his family in Delaware and Arizona throughout the year and in Florida every August. David dedicated his life to the service of God, Family and Country! He was the “rock” of our family, our “hero” and the best Dad (Pops) and Grandpa (Pop Pop) and Great Grandpa (Big Pop Pop) ever! He was a very giving, supportive, loving man and we will all miss him so very much! A brief interment service will be held in the Chapel of the Delaware Veterans Memorial Cemetery/New Castle County Cemetery at 2465 Chesapeake City Road, Bear, Delaware 19701 on Thursday, April 21, 2022, at 11:00 AM. In lieu of flowers, please feel free to donate to any organization that honors and supports Veterans. For directions or to send an online condolence, visit www.stranofeeley.com

David Butler Carney, Sr., 90, of Newark, Delaware, passed away on Wednesday, March 30, 2022, at his home in Mesa, Arizona. The son of Margretta Emma Butler and Arthur Thomas Carney, he was born on September 30, 1931, in Blairsville, Indiana... View Obituary & Service Information

The family of David Butler Carney Sr. created this Life Tributes page to make it easy to share your memories.

Send flowers to the Carney family.