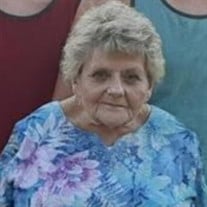 Donna M. McLaughlin, age 75 of Wilmington, DE, passed away suddenly with her daughters by her side on Sunday, August 16, 2020, at Christiana Hospital in Newark, DE. Donna was born on May 20,1945, in Wilmington, DE, the eldest daughter of the late Donald and Dorothy (Smidt) Chance. She attended St. Matthew’s School and graduated from Henry C. Conrad High School. Donna was a member of St. Matthew’s Catholic Church. As the Chance family matriarch she was known as “Mom-Mom” by many and will be truly missed. Donna was the family record keeper for birthdays, there wasn’t one she couldn’t recall and there are hundreds. This was her gift. Donna was an LPN by trade working in the maternity ward at the General Division Hospital and Tilton Terrace Nursing Home. She then later chose to open a home childcare where she nurtured and cared for many children whose parents mostly worked at the General Division. These children became part of the family. Donna loved butterflies, they always made her feel at peace. She enjoyed playing bingo and helping prepare potluck meals at her senior living residence. Donna had a kind heart and offered to help anyone in need. Donna’s most enjoyment came from spending time with her children, grandchildren, and great-grandchildren; each moment with them filled her heart with joy. In addition to her parents, Donna was preceded in death by her loving husband, Joseph E. McLaughlin (1994). They can now continue their eternal journey together. Also preceded in death by her brothers: Louis, Thomas, Willard, Phillip, and Michael; her sister, Rosemary Chance; and grandson, Randy “Stinks” Cordel. She is survived by her daughters, Theresa Cordel (Randy) and Christine McNier (Keith); grandchildren: Joseph (Amanda), Lawrence Gene, Alyssa (Thomas), Keith Jr., Jesse (Megan), and Sara Rose; great-grandchildren: Randy III “Bam”, Joseph II, Audrey, Hunter John, Ace, Shawn, TJ, Kala and Hunter Jaxson; sisters, Margaret Chance and Regina Chance; and brother, James “Bimbo” Chance (Brookie). Donna was honorary “Mom-Mom” to Nicole Smith (Chance) and Jennifer Chance - nieces by birth but so much more in her heart; as well as a host of nieces and nephews. A visitation will be held Saturday, August 22, 2020, from 12-1 PM at Strano & Feeley Family Funeral Home, 635 Churchman’s Rd., Newark, DE 19702 followed by a service in celebration of Donna’s life at 1 PM. In lieu of flowers and in honor of her late husband, donations may be sent to the American Cancer Society. For directions or to send an online condolence visit www.stranofeeley.com

Donna M. McLaughlin, age 75 of Wilmington, DE, passed away suddenly with her daughters by her side on Sunday, August 16, 2020, at Christiana Hospital in Newark, DE. Donna was born on May 20,1945, in Wilmington, DE, the eldest daughter of the... View Obituary & Service Information

The family of Donna M. McLaughlin created this Life Tributes page to make it easy to share your memories.

Send flowers to the McLaughlin family.