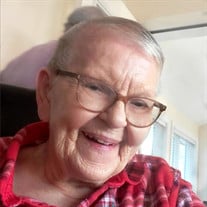 Eleanor “Snooky” L. Lepore, age 85, passed away in the morning of Wednesday, September 8th, 2021, peacefully after a long battle with Parkinson’s disease and Alzheimer’s disease. Eleanor was born to Eleanor L. and William A. Rittenhouse and grew up in Wilmington, Delaware. She took on the job of both sister and parent to her siblings: George, Butch, Dolores “Dee”, and Betty Rittenhouse, and later Richard “Dicky”, Ronald “Rocky”, and Roberta “Boopsy” Massey, especially following the early death of their father in World War II. There in Wilmington, she met Anthony Lepore, who later became her husband with whom she was married to for 68 years this September. They owned a house together in New Castle, Delaware, where they raised two children, Anthony Lepore Jr. and Valerie Lepore, then later played a significant part in raising their granddaughter, Sarah Burroughs. Their house was never without animals for whom she and Tony cared for deeply, going so far as to adopt pets from rescue organizations that were unwanted due to health or behavioral issues. Eleanor was a devout Christian and well-known for her kind, honest, and oftentimes spunky demeanor in everything she did. Eleanor’s personal mantra was to support and stand up for others in need, especially those who lacked the ability to help themselves. She spent her working life as a waitress, while also volunteering for the reading program at her daughter’s school Carrie Downie. In retirement, she was heavily involved in volunteering with Holy Spirit School in New Castle to relieve the teachers during lunch by watching the students, including her granddaughter’s class, during recess. She also spent her weekends volunteering at St. Thomas Episcopal Church assisting Anthony Sr. to clean the church and rectory and was well-known for her beautiful singing voice at her parish, Our Lady of Fatima Catholic Church in New Castle every Saturday evening. She was also a highly active donor to animal welfare, veterans, medical and social welfare organizations that she could not donate her time. In her free time, she thoroughly enjoyed spending time in nature, especially her garden or traveling to the beach, especially Assateague Island. She was an avid reader and an enthusiast for table games, murder mystery TV, trips to the casino, and dancing. Later in life she learned to love self-pampering, taking shopping trips with her daughter and granddaughter bookended by a visit to the nail salon and her favorite Vietnamese restaurant. In her final years, she was well-cared for by not only immediate family but loving in-home aids Nina, Mary, and Christine, then by the staff of Christiana Care and Seasons Hospice in Newark. She will be deeply missed and always loved, survived by her husband, Anthony; daughter, Valerie and husband Dan; granddaughter, Sarah and husband Kyle, siblings: George and wife Pat, Dee, and Dicky; nieces, Rosemary Szumowski and Susan Janocha; nephew, Shawn Norris; and the too numerous to list extended family members through birth, marriage, or friendship that became a part of her life. Always the advice-giver, she was a beacon of light for many. We expect she is now continuing to write the story her and her beloved son, Tony started of “Gertrude and Max”. In lieu of flowers, the family asks that memorial donations be made to the Parkinson’s Foundation, to the Bright Focus Foundation, or to Season’s Hospice. Services will be held on Friday, September 24 at Strano & Feeley Funeral Home , 635 Churchmans Road, Newark, DE, 19702, following her requested cremation. The public gathering will begin at 2:00PM; her pastor, Father Brubaker of Our Lady of Fatima, will speak at 3:00PM. A reception will follow at 4:00PM at Deer Park Tavern hosted by her granddaughter and nephew. For directions or to send an online condolence please visit www.stranofeeley.com

The family of Eleanor "Snooky" L. Lepore created this Life Tributes page to make it easy to share your memories.

Send flowers to the Lepore family.