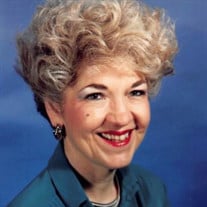 Eleanor Young, of Wilmington, DE, passed away peacefully in her sleep at home on Feb. 17, 2021. She was born on June 23, 1928, in Hays, KS, and grew up in Great Bend, KS, and West Plains, MO. She was preceded in death by her parents, Olen and Zella Brockett; her older brother, John Brockett; her first husband, Lenhard (Bud) Forsberg; and second husband, William W. Young. Her father was an optometrist and WWI veteran. Her mother taught piano lessons and would travel to students on horseback. Ellie graduated high school in West Plains, MO, and received an associate degree from Cottey College in Nevada, MO, in 1948. She received a Bachelor of Arts in English Literature from the University of Michigan where she met her first husband. Bud & Ellie lived in Orange, TX, from 1950 to 1968, where they raised five children and both sang in the First Presbyterian Church choir. Ellie began teaching elementary school, taught piano and was quite involved in community theater. She even once played a lead role in the musical, Bye Bye Birdie, after learning she was three months pregnant with her 5th child. The family was transferred to Wilmington, DE, via Bud’s employment with DuPont in 1969. She was passionate about women’s education and was an active member of PEO (Chapter H) for decades. She continued teaching at various schools including Edgemoor, Carrcroft and Wilson Elementary and was awarded Delaware Teacher of the Year in 1975. Ellie was in her element whether teaching in the classroom or acting and singing on the stage with a number of community theater groups including the Brandywiners, Brecks Mill Cronies, Candlelight Dinner Theatre, Lyceum Players, Three Little Bakers and the University of Delaware Bacchus Players. She sang in local choral groups including The Interpreters, The Mary Green Singers, Delaware Valley Chorale and OperaDelaware. A versatile actress and singer she performed in dramatic and comedic roles with equal proficiency. With a wide vocal range she could sing soprano, alto or tenor parts as needed. She was a member of Hanover Presbyterian Church and sang in the choir where her husband Bill Young was organist/director. She is survived by her brother, Charles Brockett; her children: Erica Stewart, Derek (Irene) Forsberg, Alison Jarvis, Damon Forsberg, Bonita (Dave) Meader; her stepchildren: Carolyn Young, Marcia (Al) Silkroski, and Chris Young; her grandchildren: Ioannis Zikos, Paige (Kyle) Romanick, Lauren Stewart, Benjamin (Kelley) Forsberg, Kassia (Steven) Cox, Daniel Forsberg, Joseph Jarvis, Jesse Jarvis (Kelsey Bunn), Eric (Morgan) Meader, Jason (Jen) Meader, Bryan Meader, Mayala McCormick (Michael Rickerd), Marissa Silkroski, Adam Silkroski, Sydney Silkroski, Caleb Silkroski, Christina (Zack) Zampini, Michael Young, Matthew Young; and 10 great-grandchildren: -- Murphy Romanick, Nathan Cox, Jacob Cox, William Forsberg, Lucas Forsberg, Jayden Jarvis, Elijah Jarvis, Micah Meader, Whitlea Meader, Gwendolyn Meader and two more on the way. A visitation will be held Saturday, March 20, 2021, from 10-11 AM at Immanuel Church, 2414 Pennsylvania Ave, Wilmington, DE 19808 followed by a service in celebration of Eleanor's life at 11 AM. Special thanks to Seasons Hospice and Bayada Home Health Care for their aid and attention in Ellie’s final days. In lieu of flowers, the family suggests donations be sent to P.E.O. Women helping women via https://www.peointernational.org For directions or to send an online condolence visit www.stranofeeley.com

Eleanor Young, of Wilmington, DE, passed away peacefully in her sleep at home on Feb. 17, 2021. She was born on June 23, 1928, in Hays, KS, and grew up in Great Bend, KS, and West Plains, MO. She was preceded in death by her parents, Olen and... View Obituary & Service Information

The family of Eleanor Young created this Life Tributes page to make it easy to share your memories.

Eleanor Young, of Wilmington, DE, passed away peacefully in her...

Send flowers to the Young family.