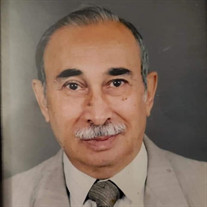 Early on August 16th 2021, at age 88, Mr. Fawzi Mikhail left this world to to be with the Lord. Born on September 3rd1932, Mr. Mikhail graduated Summa Cum Laude from the University of Cairo, College of Commerce. He met the Lord in his early twenties and faithfully ministered in Cairo and throughout Egypt where he was instrumental in establishing many new churches. Fluent in English, Mr. Mikhail started his professional career with the British icon, Shell Oil company. After few career moves, he finally settled in Alexandria where he rose through the ranks to become the deputy secretary in the Ministry of Oil and a Board member in Petrochemical, the top oil refinery conglomerate in Egypt. After his retirement from public service, Mr. Mikhail was appointed as a financial consultant to the oil sector in Egypt. Mr. Mikhail was selected to serve directly under Sultan Qaboos of Oman as an expert auditor for both the Defense and Finance ministries. During this time, he continued his witness to the Lord through in-house prayer meetings for many from different ethnicities. At the conclusion of his time in Oman, the Sultan awarded him in a private ceremony in recognition of his valuable service. One of Mr. Mikhail’s major accomplishments was to oversee the establishment of a Christian camp site on the Mediterranean where thousands from all walks of life had a chance to learn about and accept Christ as their personal savior. He also enriched the Arabic Christian library by authoring many booklets, pamphlets, and tracks. Mr. Mikhail immigrated to the U.S. to join his four kids whom he proudly raised in the fear and admonition of the Lord. He exemplified Christ in his interactions and prompted people to inquire about his hope and meek demeanor. During his last days, the medical staff attested that he was never a complainer but rather a thankful person with inner peace and a graceful smile until he closed his eyes for the last time. Mr. Mikhail is survived by his wife, Blanche Youssef; daughter, Suzy Nashed (Maher); sons: Sammy Hanna (Maha), Samieh Hana (Roda), and Joseph Mickael; and grandchildren: Melody, Amanda, Nathan, Richard, Patrick, Mark, Doris, Michal, Mark, and Andrew. He was preceded in death by his parents Hanna and Nagiba Mikhail. A visitation will be held Saturday, August 21, 2021, from 9-10 AM at Strano & Feeley Family Funeral Home, 635 Churchmans Rd., Newark, DE 19702 followed by a service in celebration of Mr. Mikhail’s life at 10 AM. Burial will follow at All Saints Cemetery. For directions or to send an online condolence visit www.stranofeeley.com. To view webcam log into https://webcasts.lifetributes.com/1156104

The family of Fawzi Mikhail created this Life Tributes page to make it easy to share your memories.

Send flowers to the Mikhail family.