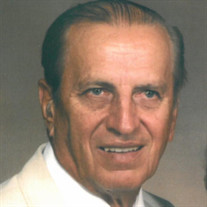 Francis "Frank" Brzoska, age 95, of Newark, DE passed away Thursday, August 27, 2020. Frank was born September 24, 1924, to Benjamin and Anna Brzoska. He was the longest surviving of 13 children. A United States Marine veteran who served his country in the South Pacific during World War II, Frank was a towering figure in both physical stature and life experience. Following his military service he joined the Ironworkers Union, and after many years, retired from Local 451. Frank also enjoyed the outdoors, fishing, hunting, gardening, and simply "tinkering " around in his garage. The zest for living continued into his later years, and he remained active by playing Pinochle at St. Anthony's Senior Center and visiting Delaware Park. Preceded in death by the love of his life and wife of 65 years, Kitty, as well as his grandsons, Steve and Scott, daughter-in-law, Kathy, and daughter, Annette. Frank lives on through his children: Francis, Robert (Maryann), Kathy (Nino), Diane (Rick), and his nine grandchildren and 14 great grandchildren. All of whom will miss him dearly. A Mass of Christian Burial will be held Tuesday, September 15, 2020 at 10:30 AM at St. John the Beloved Parish, 907 Milltown Rd. Wilmington, Delaware 19808. Due to COVID-19, the burial will be private at the Veterans Memorial Cemetery. For directions or to send an online condolence visit www.stranofeeley.com

The family of Francis "Frank" Brzoska created this Life Tributes page to make it easy to share your memories.

Send flowers to the Brzoska family.