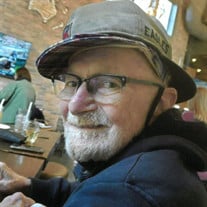 Gaylord Lawrence Voshell Tweed, age 79, of Bear, DE went home to the Lord on December 15, 2020 with his loving family by his side. He was born in Wilmington, DE to the late Elizabeth Anna (Usilton) and Henry Gaylord Tweed. This gem of a man was loving and kind and devoted to his family. He retired from AT&T as a telecommunications executive and a second career as a flooring specialist at the Home Depot. Lovingly called “Spike” by many, he was known for his love of singing, dancing, and playing multiple musical instruments. He was proud to have taught Mitzi Gaynor how to dance the shuffle. His love of music spanned his entire life as evidenced by photos of him as a tiny young boy playing the harmonica, all through the years, and continuing until just before he crossed over to Heaven. Spike loved to sing and played the mandolin, guitar, piano, and harmonica. He played in a band, danced on the Grady and Hurst TV show as a youth, and even met his beloved wife, Beverly, at a YWCA dance. Spike was a gentle soul and never met a stranger. He enjoyed all types of music, especially Swing, full orchestras, and big band sounds. He also loved woodworking, sketching, painting in acrylics, and sewing. One night, after seeing his wife Beverly struggle with sewing a curtain project, he stayed up and surprised her with another one of his talents and finished them. He had no idea what he had gotten himself into, because once Bev found out he could sew, he was immediately hired to make all the curtains in the house! He even joked about opening a curtain business called “Ruffles by Gay”. Spike was a jack of all trades and was proud of his many large DIY projects including building a barn and multiple home remodeling projects. He could always be found with his harmonica, pipe, and a cup of coffee. Spike’s greatest joy was time spent with his family. His grandchildren called him “Perfect Pop Pop” and loved when he entertained them with magic tricks and just being together. Everyone who met Spike had a friend for life. He loved people deeply and his family and friends loved him right back. Spike leaves behind a legacy of hard work, love of God, and love of family. He will be deeply missed. Spike is survived by his children: Jeffrey Tweed (Annette), Judy Springer, and Elizabeth Kubasek (Christopher); 6 precious grandchildren: MaryBeth, Sarah, Benjamin, Alexis, Andrew, and Alexandria; and two great grandchildren: Audrey and Dean; along with a host of extended family and friends. He was preceded in death by his beloved wife, Beverly A. Jones Tweed; his son-in-law, Scott Springer; his brother, William Frank Tweed; and his sister, Betty Ann Booth. Family and friends are invited to attend a visitation on Tuesday, December 22 from 10-11 AM at the Strano & Feeley Family Funeral Home, 635 Churchmans Road, Newark, DE 19702. A service in celebration of Spike’s life will follow at 11 AM. Burial will be at Gracelawn Memorial Park. In light of COVID 19 restrictions, guests will be required to wear a mask and practice safe social distancing. A live webcast of the service will be available for those who are unable to attend, please contact the family to secure a private link for viewing. In lieu of flowers, donations are suggested to St. Jude’s Research Hospital for Children at stjude.org or to Tunnel to Towers Foundation at T2T.org For directions or to send an online condolence visit www.stranofeeley.com Strano & Feeley Family Funeral Home 302-731-5459

Gaylord Lawrence Voshell Tweed, age 79, of Bear, DE went home to the Lord on December 15, 2020 with his loving family by his side. He was born in Wilmington, DE to the late Elizabeth Anna (Usilton) and Henry Gaylord Tweed. This gem of a man... View Obituary & Service Information

The family of Gaylord Lawrence Voshell Tweed created this Life Tributes page to make it easy to share your memories.

Send flowers to the Tweed family.