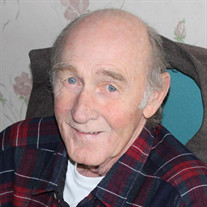 George W. Thomas, 77, peacefully took his final breath surrounded by his family on Monday, May 31, 2021. George was born in Wilmington, DE on October 13, 1943, to Howard and Alice. He had 3 brothers: Bill, Howard Jr., and Allen and a sister, Linda. George eventually settled in Claymont, DE, and currently resided in Townsend, DE. He was a loving father, doting Pop-pop, and devoted husband to his wife, Theresa with whom he celebrated over 50 years of marriage until her death in March 2020. As a young man, George enlisted in the U.S. Marines and proudly served his country as a sergeant in the Vietnam War specializing as a Rocket Gunner. After the war, he married Theresa and started a family in Claymont, DE where he worked in commercial/ residential maintenance. The man knew how to fix almost anything and enjoyed sharing that knowledge! George had a way of making you feel welcome in his presence. When you entered any room, he was in you knew to expect a big hug and a kiss on the cheek. George enjoyed being with friends and family and loved time spent with he and his wife’s lifelong friends Ron and Doris Betts, as well Ms. Martha Lawhorne, who was like a mom to him, which gained him an ‘extended’ family of brothers and sisters. However, nothing made George light up more than seeing his grandchildren. They each have a special place in his heart. George is survived by his daughters, Christine O’Leary and Patricia McDowell; sons, George Thomas, Jr (Gwen) and William Thomas (Alison); grandchildren: Julian, Nicki, Dustin, Daniel, George III, Gillian, Gwendolyn, James, Nicholas, and McKenna; brother, Bill Thomas; and sister, Linda Magaw. He was preceded in death by his best friend and beloved wife, Theresa Thomas; both of his parents; granddaughter, Claudia O'Leary; and brothers, Howard, Jr. and Allen Thomas. The family asks that in lieu of flowers to please donate to The Wounded Warrior Project either online or by calling 855-448-3997 or directly to your local Hospice facility in George’s honor. There will be a Celebration of Life at a future date. The family will reach out with the details. To send an online condolence, visit www.stranofeeley.com

George W. Thomas, 77, peacefully took his final breath surrounded by his family on Monday, May 31, 2021. George was born in Wilmington, DE on October 13, 1943, to Howard and Alice. He had 3 brothers: Bill, Howard Jr., and Allen and a sister,... View Obituary & Service Information

The family of George W. Thomas created this Life Tributes page to make it easy to share your memories.

Send flowers to the Thomas family.