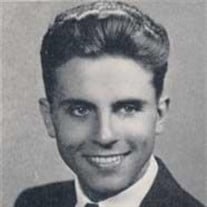 The Reverend Harry Goodale Marshall (January 11, 1918) of Rocky Point, Long Island, New York, from his Delaware home entered peacefully into the presence of our Lord and Savior on July 17, 2021, at the age of 103 years and six months. There, he has joined his wife of 70 years, Florence Weir Marshall, who entered the presence of the Lord in 2012. Harry left behind a rich legacy of eternal impact for God’s kingdom, its reach unquantifiable. A bronze star World War II veteran of the U.S. Army in which he served as Assistant to the Chaplain, Harry married Florence in 1942. He graduated from Columbia Bible College with a B.A. degree in Biblical Education in 1947 and his M.A. degree in Biblical Education in 1948. Then, he prepared for the ministry and graduated from Faith Theological Seminary in 1951 with his M.Div. degree. He desired to spread the Gospel to the remote regions and thus began serving in Peru in 1953 with his first three children: Ruthie, Lois, and Colin. Two more children, Verne and Nathan, were born on the mission field in Peru. Harry served for 32 years under the auspices of the Independent Board for Presbyterian Missions, later World Presbyterian Missions, and Mission to the World, returning to the United States due only to the unrest of Peru in 1985. The sooner-than-expected missionary-in-retirement nonetheless continued preaching and teaching the Word of God in various churches throughout the Delaware valley all the way through the age of 101. His last sermon as the pastor of Manor Presbyterian Church was entitled: “Love your Enemies, Love your Neighbor, Love the Lord.” Harry’s faithfulness and dedication to the ministry knew no bounds, and the baptisms and marriages he officiated are innumerable. Harry learned not only Spanish, but also Quechua, in order to deliver the Bible to the most remote peoples of the Peruvian jungle and mountains. Harry was preceded in death by his wife, Florence and eldest daughter, Ruthie Gutierrez (Rev. Gerardo) both in 2012; parents, Floyd and Ruth Goodale Marshall; sister, Shirley Bennett; brother, Wayne Marshall; sister, Avis Phelps; sister, Vi Hazard; and grandchild, Keila Gutierrez. He is survived by his children and their spouses: Lois and Rev. Michael Clark of England, Colin and Elizabeth Marshall of Delaware, Rev. Verne and Alina Marshall of Chile, and Nathan and Cynthia Marshall of Delaware; brother, Dr. Verne Marshall of New York; sister, Dale Magnoli Russo of Florida; 21 grandchildren; 24 great-grandchildren; one great-great-grandchild; and many friends whom he loved dearly. Interment will be held on Monday, July 26, 10:00 a.m. at Silverbrook Cemetery, Wilmington. Afterward, a service to celebrate the life of the Rev. Harry Marshall will be held at 11:30 a.m. at Faith Presbyterian Church, 720 Marsh Road, Wilmington. A luncheon will follow. The family wishes for all friends to join them. In lieu of flowers, it would be consistent with the desires of Harry that any gifts might have an eternal impact, and as such, it is the desire of the family that they are given in his memory to Mission to the World (www.mtw.org) or Radio Amauta (www.RadioAmautaPeru.com). For directions or to send an online condolence, visit www.stranofeeley.com

The Reverend Harry Goodale Marshall (January 11, 1918) of Rocky Point, Long Island, New York, from his Delaware home entered peacefully into the presence of our Lord and Savior on July 17, 2021, at the age of 103 years and six months. There,... View Obituary & Service Information

The family of Rev. Harry Goodale Marshall created this Life Tributes page to make it easy to share your memories.

Send flowers to the Marshall family.