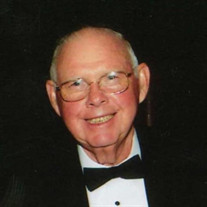 Harvey L. Turpin, 93, of New Castle, passed away peacefully on February 10, 2022. Born in Port Norris, NJ to Albert and Mary Turpin, Harvey graduated from Millville High School in 1949. A proud Navy Veteran, Mr. Turpin went on to receive his Associates degree from Goldey College in 1951 and later received his Bachelor’s from University of Pennsylvania Wharton School in 1965.He married the love of his life, Phyllis, in 1951 while working as a bookkeeper at the Beatty Contracting Company. He later went to work for DuPont and retired from there in 1985. After retirement, he moved to Lakeland, FL, where he enjoyed playing golf and was a member of the Sandpiper Golf Club. He loved traveling and was able to visit many countries around the world. Harvey also enjoyed his summers down in Ocean City, NJ, where he was a member of the Ocean City Seniors League and the OC Snowbirds League. In 2012, he moved back to Delaware to be closer to his grandchildren and great grandchildren and is a member of the Heritage Presbyterian Church in New Castle. Harvey is survived by his wife of 70 years, Phyllis; children: Marilyn Turpin, Janet (Howard) Stehl and James (April) Turpin; grandchildren: Michael, Mark, and Jeffrey; and great grandchildren: Rebecca, Leslie, Mackenzie, Andrew, Jaxon, and Colton. He was preceded in death by his parents. Relatives and friends are invited to the viewing on Wednesday, February 16, 2022 from 10 to 11 AM at Strano & Feeley Family Funeral Home, 635 Churchmans Road in Newark, where a funeral service will be held at 11 AM. Burial will be held privately at the Delaware Veterans Memorial Cemetery in Bear. To send an online condolence please visit www.stranofeeley.com

The family of Harvey L. Turpin created this Life Tributes page to make it easy to share your memories.

Harvey L. Turpin, 93, of New Castle, passed away peacefully on...

Send flowers to the Turpin family.