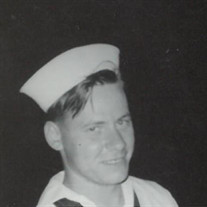 Henry Edward “Butch” Alters, age 75, of Wilmington, DE, went home to be with the Lord and his predeceased loving wife of over 34 years, Virginia M. Alters. Henry was born in 1945 in West Chester, PA as Harry Edward Tuckloff Jr., to the late Harry E. and Thelma Pearl Tuckloff but has used his legal guardian’s name of Henry E. Alters since he was 10 years old. Henry grew up in the Wilmington, DE and attended St. Patrick’s and Sacred Heart parochial schools and graduated from Wilmington High School in 1963. He graduated from Goldey Beacon College in 1978, where he made the Dean’s List four out of six trimesters and obtained an Associate’s Degree in Business Management. Butch enlisted in the Navy in 1963 until honorably discharged in 1967. He served on the Amphibious Flagship, the USS Taconic AGC-1 and the USS Telefair APA 10. In 1965, his ship the Taconic was deployed to Santo Domingo for 2 months for crises intervention. Henry also served in the Delaware National Guard for 2 enlistments from 1974 to 1976 and as a supply sergeant at Headquarters Company in the 281st Army Band in 1983. Butch worked at many jobs at the age of 16, he was a movie usher at the Old Ritz Theater and also at Warner and Towne movie houses. He worked at Jos Bancroft Co., Avisun Corp as a lab tech, Electric Hose and Rubber, Standard Chlorine, Heils and Spatz Fiberglass and for over 32 years as a truck driver, boom crane operator at A. H. Angerstein Inc. He also worked part time for many security guard agencies. His last job was at the Easterseals as a bus driver, which he found to be his most rewarding. Henry enjoyed horse racing and had worked for a while in 1971 on the starting gate at Delaware Park. Henry is predeceased by brothers, Vernon McNelly of Smyra, DE, and Roy McNelly of Georgia; sisters, Verna Trump of Hartly, DE and Cathy Bowers of Emmitsburg, MD. He is survived by sisters, Brenda Strain of Hertford, NC, Ruth Gleason, Wolfsville, MD and Debbie Stevens of New Castle, DE; stepson, James (Patty Carter) Roberts and dear friend and caregiver, Connie Fox. Interment will be held on September 29, 2020 at 1PM at the Delaware Veterans Memorial Cemetery in Bear, where he will be laid to rest with his loving wife, Virginia. Contributions may be made to Easterseals Delaware & Maryland's Eastern Shore, 61 Corporate Circle, New Castle, DE 19720.

Henry Edward &#8220;Butch&#8221; Alters, age 75, of Wilmington, DE, went home to be with the Lord and his predeceased loving wife of over 34 years, Virginia M. Alters. Henry was born in 1945 in West Chester, PA as Harry Edward Tuckloff Jr.,... View Obituary & Service Information

The family of Henry "Butch" Edward Alters created this Life Tributes page to make it easy to share your memories.

Send flowers to the Alters family.