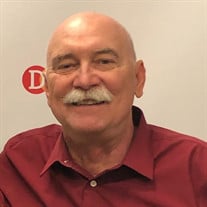 Henry A. Tomczyk, age 70, of Wilmington, DE, entered eternal life Monday, March 8, 2021. Henry was born in the Netherlands on September 25, 1950, to the late Catherine Koekkoek and Siegmund Tomczyk. His family immigrated to the United States in 1957 and became citizens a few years later. Henry served in the US Navy during the Vietnam War where he served as a blue water sailor. He also served proudly in the DE Air National Guard for 26 years, retiring in September 2010. Henry acquired many friends throughout his years of service to his country. He was a very involved volunteer for Special Olympics and was well-loved by the athletes and their families. He enjoyed spending time hanging out with his fellow Elks members at Lodge 2281 for beers, food, and good times. Henry had a great heart and loved his plants and animals. He was a loving father to his children, Thea and Siegmund and fur-kid Luther. His job on earth is finished and now he will join his parents and his cousins: Helena Tomczyk Burkentine and Harry Kusters, spending his life in Heaven in the presence of the Eternal Beatific Vision. May he rest in peace. Henry is survived by his daughter, Thea and her husband, Nigel; son, Siegmund; his former wife, Jane; 4 siblings: Sister Marlies of St. Gertrude Monastery, Frans (Debbee), Elly, and Tony (Michelle); and several nieces and nephews. Services will not be held at this time; a Celebration of Life will occur on a future date, if friends would like to be notified of the event when it becomes available, please contact his daughter, Thea. In lieu of flowers, donations may be sent to Special Olympics of DE, 619 S College Ave, Newark, DE 19716. To send an online condolence, visit www.stranofeeley.com

Henry A. Tomczyk, age 70, of Wilmington, DE, entered eternal life Monday, March 8, 2021. Henry was born in the Netherlands on September 25, 1950, to the late Catherine Koekkoek and Siegmund Tomczyk. His family immigrated to the United States... View Obituary & Service Information

The family of Henry A. Tomczyk created this Life Tributes page to make it easy to share your memories.

Send flowers to the Tomczyk family.