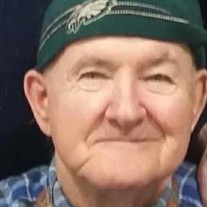 Howard Belin Hamm was born March 1, 1938, in Wilmington, Delaware. Howard was a resident of Smyrna for many years. He was the son of Chester A. Hamm, Sr. and Minnie Alice Testerman Hamm (both deceased). He was one of eight children. Howard died Thursday morning, February 11, 2021, at Kent General Hospital in Dover, DE. He is survived by and will be deeply missed by his daughters, Shirley E. (Hamm) Pierce (Joseph), Christine Rosario (Sonny) and two sisters, Charlotte J. (Hamm) McCool and Mary L. (Hamm) Baer. Howard is also survived by many grandchildren, nieces and nephews and step-children and step-grandchildren and the family dog, Daisy Mae. Howard was preceded in death by his wife, Servia Hamm; grandson, Justin Pierce; brothers, Chester A. (Joe) Hamm. Jr., Henry C. Hamm, Spencer D. Hamm, Ronald G. Hamm and sister, Gladys (Hamm) McDaniel. During his eighty-two years, Howard was employed by Michener Bros., Cranston Hgts., DE., General Motors and Short's Garage, Wilmington, DE. Howard was an avid hunter of deer, squirrel, and rabbits and was sometimes known to hunt raccoons. He was also a fisherman. He received an award from the State of Delaware for bagging a 10 point deer and he had the trophy head hanging in his room to prove it. Along with his brother Ronny, who recently passed, they shared many days hunting and fishing, teaching young family members the art of hunting, hitting your target of game and the skills of angling a fishing line. Howard also had an art of drinking Budweiser Beer, of which, throughout his lifetime kept Anheuser-Busch Company in business. In his later years, after suffering a stroke, he was taken care of by his daughter Shirley and her family for over 25 years. He attended New Horizon Adult Daycare in Smyrna for many years. He was always liked by his friendly smile and his unique handshake. While at home in his room, he could look out of his window and see the birds, squirrels, rabbits and occasionally a hawk. Funeral service will be held privately. In lieu of flowers, memorial donation in Howards name may be made to your favorite charity. Please leave your condolences and share photos.

Howard Belin Hamm was born March 1, 1938, in Wilmington, Delaware. Howard was a resident of Smyrna for many years. He was the son of Chester A. Hamm, Sr. and Minnie Alice Testerman Hamm (both deceased). He was one of eight children. Howard... View Obituary & Service Information

The family of Howard Belin Hamm created this Life Tributes page to make it easy to share your memories.

Send flowers to the Hamm family.