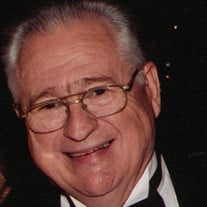 Jim Rawleigh passed away on January 1, 2021 at The Seasons Hospice Facility in Wilmington, DE. He was born in Cambridge, MD on April 16, 1942 to Norman J. and Mary (Addie) Rawleigh. Jim was the second of 32 grandchildren born to James and Martha McKelvey of Eldorado, MD. He grew up in Cambridge and graduated from Cambridge High School, class of 1960. Upon graduation he enlisted in the United States Navy where he served for seven years in the submarine service. In 1962 he married Mildred (Milly) Annette Tyler of Cambridge. He and Milly traveled and lived in several states in conjunction with his military assignments. Upon honorable discharge from the Navy in 1967 they returned to Cambridge where Jim served as chief maintenance engineer for what was then the new Dorchester General Hospital. In 1979 Jim and Milly moved to Tulsa, OK where he attended and graduated from Rhema Bible Training Center. They returned to Cambridge where he became the founding pastor of Cambridge Christian Fellowship (Now “The River”). He eventually moved on to serve as pastor of several churches in the eastern part of North Carolina. In 2005 Milly began a long battle with breast cancer and passed away in Feb, 2012. Jim subsequently married Susan Keene Lewis, who was also originally from Cambridge. They made their home in Newark, DE. In the six years they were married they traveled extensively; they enjoyed many cruises together, especially to warmer climates during the winter months. While in high school, Jim and his best friend, Jim Shepherd (Shep) formed a dance/jazz band, “The Fabulous Volts”. Through the years both Jims continued to have a passion for playing the guitar and frequently got together to make music. Jim Rawleigh and his wife Susan, a talented vocalist often performed as a guitar/vocal duo on cruise ships, at nursing care facilities, in hospitals, and for Veteran Affairs. In addition to his parents and first wife, Jim was predeceased by his brother in law, Donald E. Andrews, and numerous aunts and uncles. In addition to his wife, Susan, Jim is survived by his three children and their spouses; Brian Rawleigh (Esther) of Round Rock, TX, Joy Rawleigh Cheek (Joe) of Tulsa, Ok, and Karen Rawleigh Berry (LB) of Kinston, NC; five grandchildren; two great-grandchildren; his sister, Linda Rawleigh Andrews of Cambridge; and his lifetime best friend, closer-than-a-brother, Jim Shepherd of Severn, MD. He is also survived by three uncles and twenty-nine first cousins on the McKelvey side of the family. A memorial service will be held in Cambridge at a later date when COVID restrictions are relaxed, or when the weather is suitable for an out door gathering. To send an online condolence, visit www.stranofeeley.com

Jim Rawleigh passed away on January 1, 2021 at The Seasons Hospice Facility in Wilmington, DE. He was born in Cambridge, MD on April 16, 1942 to Norman J. and Mary (Addie) Rawleigh. Jim was the second of 32 grandchildren born to James and Martha... View Obituary & Service Information

The family of James William Rawleigh created this Life Tributes page to make it easy to share your memories.

Jim Rawleigh passed away on January 1, 2021 at The Seasons Hospice...

Send flowers to the Rawleigh family.