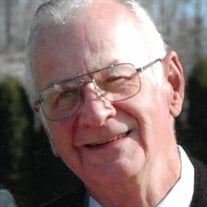 James M. Russell, Jr., 88, of Newark, DE passed away January 24, 2021. Mr. Russell was a 1950 graduate of H. Fletcher Brown Vocational School in Wilmington and worked 43 years at the News Journal as a Composing Room Supervisor. He was also a... View Obituary & Service Information

The family of James M Russell Jr. created this Life Tributes page to make it easy to share your memories.

Send flowers to the Russell family.