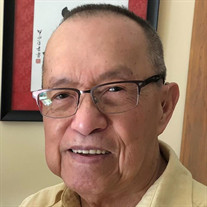 Dr. Joaquin "Jack" Chan Mallari, 90, of Bear, Delaware & Pennsville, New Jersey, passed away peacefully on February 22, 2022. Jack was born June 1, 1931, in Manila, Philippines, to Alfonso and Marta Chan Mallari. He was the second oldest of twelve siblings and the first of many family members to make it to America after he graduated from medical school at the University of Santo Tomas in Manila, completing his medical residencies in Ohio, NYC, and Delaware. Jack ran his private practice in Salem County, NJ, for 42 years as one of the few pediatricians. His passion for medicine and endearing manner with children had him treating many of his patients' kids once they grew up and had their own. He was the type of small-town doctor who paid house visits or had patients come to his home at midnight for an emergency appointment. His kitchen table was often the neighborhood urgent care center where he stitched up his sons and their friends' misadventures. He was an educator who enjoyed extending his knowledge and passion to medical students until he retired in 2012. While working together in the same Emergency Room, Jack met his sweetheart, Susan (a nurse). Hello!? They wed in Paterson, NJ, in 1971 and were happily married for 50 years. They have three children and six grandchildren. Even though he spent the last 60 years in America, he remained well connected with his siblings and family in the Philippines. Jack's endless sarcasm and wit could sometimes throw you off your guard, which we know he liked! He enjoyed traveling the globe with his wife, had a deep passion for cooking, eating was a hidden skill and he fancied the sweet, sweet sound of the playing cards. 21! Jack was preceded in death by his parents, Alfonso and Marta; his sisters: Corazon Mallari, Temotea Mallari and Rufina Serrano. He is survived by his wife, Susie; his sons: Chris (Erin), Jordan (Lindsay), and Alex (Marla); his brothers and sisters: Pacita Cano, Nena Aquino, Tony Mallari, Nita Ochoa, Joey (Rosa) Mallari, Roger Mallari, and Geny Mallari; grandchildren: Charlotte & Dalisay, Hadley, Mason & Myles & Mia; and dozens of nieces and nephews. A viewing will be held Friday, February 25, from 6-8 PM at Strano & Feeley Family Funeral Home, 635 Churchmans Rd., Newark, DE. An additional viewing will be held on Saturday, February 26, 2022, at 9 AM followed by a Mass at 10 AM at St. Elizabeth Ann Seton Catholic Church, at 345 Bear Christiana Rd, Bear, DE. Burial will immediately follow at 11:30 am at All Saints Cemetery, 6001 Kirkwood Highway, Wilmington, DE. The family asks that everyone please wear a mask.

The family of Joaquin C. Mallari created this Life Tributes page to make it easy to share your memories.

Send flowers to the Mallari family.