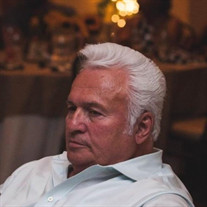 John J. Higgins, Jr. passed away suddenly at home on October 29, 2021. Affectionately known as Jack, he was born on January 12, 1946 to John and Lena Higgins in Wilmington, DE. He resided in the New Castle County and Elkton, MD areas along with his parents and sister, Lena. There he enjoyed living on his family’s farm, playing baseball, drag racing and eating his mother’s homemade cooking and chocolate cakes. Jack graduated from Elkton High School in 1964 and shortly thereafter met the love of his life, Dolores “Dee” M. VanMeter. Jack and Dee married August 19, 1967 and were happily married for 54 years raising their two daughters, Dawn and Tina. For the past 11 years, Jack and Dee resided in Middletown, DE along with their daughters, son-in-law and three grandchildren, in a house filled with love, spirituality, and nonstop fun-filled chaos, which the family refers to as the BIG house. Jack played an active role in all of their lives. Jack took great pride in his craftsmanship as a professional painter and did so for 24 years for the Wilmington Hospital. His true passion though was being a husband, father, grandfather and minister to the Congregation of Jehovah’s Witnesses where he was baptized in 1974. He was also part of many other volunteer activities within the organization of Jehovah Witnesses such as the Hospital Liaison Committee working alongside the University of Pennsylvania Hospital to create programs to help enable bloodless surgeries, the Local Design Committee (LDC) helping to build and maintain places of worship, as well as devoting himself to countless hours teaching others about God’s Kingdom and the future hope for mankind. Jack loved spending time with family, being Pop Pop to his grandchildren including babysitting and chauffeuring them over the years, and recently “supervising” home carpentry projects with his youngest grandson. He could eat spaghetti every night of the week. He enjoyed a cold beer, especially a Heineken, on a hot summer day after paying special attention to his finely manicured lawn, driving his numerous trucks and working on his cars. Jack also liked listening to Elvis Presley or any of the oldies, and sitting in his recliner with his dog Chloe watching the evening news, Blue Bloods, Family Feud, The Lawrence Welk Show, or any old westerns. Jack was known for his humor, compassion and standing firm for righteousness. He had a larger-than-life personality, a big heart, and a full head of hair that he was well-known for and never had a hair out of place. For those who knew him and those he just met, his love for people was apparent. He loved to talk, tell stories and joke around. He was fun loving and took a true genuine interest in others, yet always direct, never mincing words. “That’s the thing”, “I don’t know”, “It is what it is” and “Let me tell you this, and you might not like it” were just some of his famous sayings. Jack was predeceased by his father, John Higgins; mother, Lena (Maccari) Higgins; brother-in-law, Thomas Adams; nephew, John Adams; and his beloved schnauzer, Chloe. He is survived by his wife, Dolores “Dee” Higgins; daughter, Dawn M. Treherne and grandsons, Cheyney and Brayden; daughter, Tina L. Hill and son-in-law, Brian Hill, and granddaughter, Kennedy; sister, Lena Adams and nephew, Michael Adams (wife Christine); and numerous extended family and friends. Jack will be sadly missed and forever in our hearts until we see him again, as he firmly believed, under God righteous rule on earth as promised in Psalms 37:29. A private visitation by invitation only with immediate family will be held Saturday November 13, 2021 at 4PM ET at Strano & Feeley Family Funeral Home, 635 Churchmans Road, Newark, DE 19702 followed by a virtual Memorial Service at 5pm ET through Zoom. All are welcome to join the virtual memorial service at 5pm ET, using the following details: Important Note/Requests: Space is limited, so please limit one device per family for logging on; if maximum capacity is reached on the zoom details below then please join the live stream link also noted further below. · Zoom Meeting ID: 879 7555 6886 · Zoom Passcode: 218730 · Zoom Link: https://jworg.zoom.us/j/87975556886?pwd=ZTNTUjRKNndzVWw3Wk1iS2d6RkVwQT09 · Zoom Dial by your location: +1 312 626 6799 US (Chicago) +1 646 558 8656 US (New York) +1 301 715 8592 US (Washington DC) +1 346 248 7799 US (Houston) +1 669 900 9128 US (San Jose) +1 253 215 8782 US (Tacoma) Live stream link in the event the above zoom link reaches maximum capacity: https://youtube.com/channel/UCnpfbZzOQappxhDwo7L-ZKg To send an online condolence visit www.stranofeeley.com. In lieu of flowers, donations may be sent to either the Worldwide Work of Jehovah’s Witnesses by visiting Donate to Jehovah’s Witnesses (jw.org) or Penn Medicine The Center for Transfusion-Free Medicine via the How to Give - Penn Medicine link and indicating it is for The Center for Transfusion-Free Medicine.

John J. Higgins, Jr. passed away suddenly at home on October 29, 2021. Affectionately known as Jack, he was born on January 12, 1946 to John and Lena Higgins in Wilmington, DE. He resided in the New Castle County and Elkton, MD areas along... View Obituary & Service Information

The family of John "Jack" Higgins Jr. created this Life Tributes page to make it easy to share your memories.

Send flowers to the Higgins family.