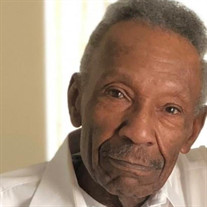 JOSEPH LOUIS ADAMS was born in Denton, Maryland on June 11, 1938, to the late George Albert Sr. and Bessie Lee Adams. At the age of three, he moved to Wilmington, Delaware with his family, spending most of his childhood on Lombard Street. The youngest of six siblings, he was quite “the adventurer”, fun loving and always on the go. As a child, he enjoyed watching Western movies with his sister Eliza, fondly nicknaming each other “Tonto” and the “Lone Ranger”. Joe received his early education at “School #5” (10th and Spruce Street) and later transferred to “School #29 (10th and Walnut Street), where he attended 3rd-8th grade. After his mother was advised that Joe was bored and not being challenged enough, he applied and was accepted into Salesianum High School where he was the fourth African American to attend. In the 1950’s, Joe graduated from Salesianum High School with honors. Years later, he attended San Jose State and The University of Southern California, studying Computer Programming. Joseph joined The United States Air Force and during his four years was stationed at Elmendorf Alaskan Air Command and Lackland Air Command in San Antonio, Texas. Years later, he married the love of his life, the late Pauline C. Adams. Together they created great memories and traveled extensively across the country. Mr. Adams worked many jobs and talked about how in 1978, he read an ad in the News Journal asking if anyone was interested in building computers. He called the number in the ad, and the call was answered by Steve Jobs who immediately asked him, “ Do you know the “Binary Code”, which Mr. Adams quickly answered, causing Mr. Jobs to state, “a ticket will be in the mail”. This small business became the evolution of a major computer and cell phone cooperation, Apple Incorporated. Mr. Adams spent fifteen years of employment under the leadership of former CEO Steve Jobs. After his tenure with Apple, he later began working at The Home Depot. While employed there he was promoted to a Supervisor and Receiving Manager. Following his time at Home Depot, Joe soon became employed as a Security Guard at Delaware Park and Casino. He spent the last 13 years working with coworkers who in time became his second family. Bethel A.M.E. Church was Joe’s family’s home church where he attended as a young boy. However, he said that it was in 1985 that ‘Jesus called me’ ” and he began attending Salem Baptist Church in Lawrenceville, Georgia. Years later when he returned to Delaware to be near his family, he joined St. Luke Community Christian Church under the pastorship of Reverend Dr. George W. Anderson. Mr. Adams was a wise and deeply intuitive man, often quoting scriptures and parables. When people would come and talk to Joe, he would proudly share his love for God. His favorite Bible verse was John 16:33. He served as a Board-Certified Ordained Deacon, a Grief Minister, and an Usher. He LOVED ushering, he did it proudly with prestige and honor. Often times, he referred to his role as being a “Gate Keeper” for the Lord. It wasn’t uncommon on a Sunday morning to see him lead the choir in with his “signature strut”. Joe felt HIS church was a place to “unload” and “reload” to prepare him for the upcoming week. Prior to the Pandemic, he stated, “St. Luke is a hospital and every Sunday you go to get an immunization shot against sin. Sometimes it doesn’t work, so you go back to get a booster”. Joe believed that the Bible was the “Owner’s Manual” to whatever you needed… and he asks: “What Better Owner’s Manual, do you need?” Joe LIVED his life to the fullest! He sang, danced, played guitar, and previously took lessons at The Warlester School of Music in Philadelphia. A strong baritone, he was a member of two singing groups, “The Flames” and a group while enlisted in the Air Force. More recently, Joe enjoyed “That’s What I like” by Bruno Mars. He would often sing that part of the song that says, “I will never make a promise that I can’t keep”. In addition to music, Joe loved his Oakland Raiders, fine clothing, and beautiful cars. Joseph was predeceased by his wife, Pauline Adams (“My most favorite thing was loving Pauline Adams and that was The Truth!); parents, George Sr. and Bessie Adams; brothers, George Adams Jr. (Althea), and James Adams Sr. (Leslie); sisters: Violetta Wise (Paul), Carolyn Adams and Eliza Brown (Wendall); daughter, Stephanie Beard; nieces, Sandra Johnson (James Sr.) and Carolyn “Rusty” Adams; and nephews, James Adams, Jr. and Michael Adams. Joe loved his family and his friends. God chose him to be the last surviving sibling and patriarch of the family. He is survived by sons: Christopher Adams Landon (Victoria), Abdul Ali-Baqi, Shawn Simpson (Rachel), and Kimble Simpson; daughters, Tysh Simpson, and Wendy Chase (Kim); grandchildren: Te’Naja Simpson (who he raised from birth and was “Pop Pop’s Heart and Sunshine”), Tyna Day (Vernon), Deion Adams, Rae’Shawn Simpson, Dominique Simpson, Veronica Adams Landon, Tayvon Little, Nicholas Tinsley, and Alex Tinsley 17 great-grandchildren; and a host of nieces/ nephews, other relatives, and friends. A visitation will be held Sunday, February 6, 2022, from 6-8 PM at Strano & Feeley Family Funeral Home, 635 Churchmans Rd., Newark, DE 19702. A second visitation will be held Monday, February 7, 2022, from 9-10:45 AM at St. Luke Community Christian Church, 320 Tilghman St., Chester, PA 19013 followed by a service in celebration of Joseph’s life at 11 AM. Burial will follow in Gracelawn Memorial Park, New Castle, DE. For expanded obituary, directions or to send an online condolence visit www.stranofeeley.com

JOSEPH LOUIS ADAMS was born in Denton, Maryland on June 11, 1938, to the late George Albert Sr. and Bessie Lee Adams. At the age of three, he moved to Wilmington, Delaware with his family, spending most of his childhood on Lombard Street. The... View Obituary & Service Information

Send flowers to the Adams family.