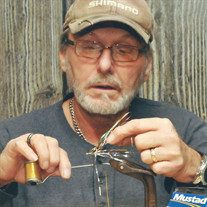 The fish lost their best predator on Monday, June 7th 2021, when Joseph J. Pouser of Wilmington, DE went home to be with the Lord at the age of 78. Joseph leaves behind his wife of 44 years, Lynn; children: Joey Pouser, Wayne (Debbie) Pouser, Connie Mendez and Brett (Taylor Cahill) Pouser; grandchildren: Tammy (Cedric), Joe (Shelbie), Amanda (Danny), Stephanie (Austin), Samantha (Brian), Karlee, Eddie, Danielle, Mia and Angie; great grandchildren: Kelis, Allie, Landon, Daniel, Lena, Brynlee, Adaline, and 2 great granddaughters on the way. He is also survived by his cousin and best friend, Larry (Marilyn) Lutackas as well as many loving nieces, nephews and cousins. Joseph was preceded in death by his parents, Joseph and Leona Pouser, and brother Danny Pouser. Joseph was born in Kearny, NJ but spent most of his life splitting time between the mountainous landscape of Wilkes Barre, Pennsylvania, the sandy coast of South Bethany Beach, Delaware, and the quiet town of Newport, Delaware where he built his first and only home at 20 years old. From a young age, Joe was a practical joker who loved causing mischief with his close friend Joe Corsello. Joseph later achieved the title of co-author after outlining their childhood misadventures in his autobiographical book ‘Looking in the Rearview’. Joseph was accomplished in a variety of trades including lithography and photography. He also spent time as a volunteer firefighter at Minquas Fire Company. Joseph was a seasoned fisherman who could often be found with his line cast into whatever water he could find. Whether it was from the side of a creek or the deck of his ocean vessel The Impulse, his line was sure to bring in the biggest catch. While on solid land, Joseph enjoyed spending much of his summers with his hands in the dirt of his vegetable garden which he tended for over sixty years. He was a lifelong weight-lifting and fitness enthusiast who continued to outlift men decades younger than himself until the very end of his life. Joseph was a huge fan of rock-n-roll and an avid bass player who passed along his love of music to his children. He was a gun enthusiast and expert marksman who rarely missed a bullseye at the range. A proud member of the Delaware Saengerbund & Library Association, Joseph spent his free time learning the German language and exploring German culture - he was especially a fan of their beers! Joseph loved watching Nascar races, Pittsburgh Penguin hockey games, and History Channel documentaries. He was a sharp dresser who in his most recent years acquired a handsomely curated collection of sneakers, hats, and watches. He was beloved by his family with whom he delighted in spending time. He will be dearly missed. Relatives and friends are invited to the viewing on Sunday, June 13, 2021 from 6 to 8 PM and again Monday, June 14, 2021 from 10 to 11 AM at the Strano and Feeley Family Funeral Home, 635 Churchmans Road in Newark, where a funeral service will be held Monday June 14, 2021 at 11 AM. Interment will follow at All Saints Cemetery in Wilmington. In lieu of flowers, memorial donations may be made to St. Philips Lutheran Church, 5320 Limestone Rd, Wilmington, DE 19808. To send an online condolence visit www.stranofeely.com

The fish lost their best predator on Monday, June 7th 2021, when Joseph J. Pouser of Wilmington, DE went home to be with the Lord at the age of 78. Joseph leaves behind his wife of 44 years, Lynn; children: Joey Pouser, Wayne (Debbie) Pouser,... View Obituary & Service Information

The family of Joseph J. Pouser created this Life Tributes page to make it easy to share your memories.

Send flowers to the Pouser family.