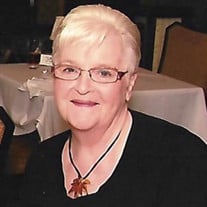 Julianna “Bernadette” (O’Connell) Millman, 72, of Newark, Delaware, went to be with the Lord on Saturday, June 19, 2021. Bernadette was born on February 10, 1949, to the late Hubert O’Connell and Nellie (Murray) O’Connell and was one of six children raised in Galway, Ireland. Bernadette came to the United States at the age of 22 and worked various jobs, but she had a passion for taking care of the elderly as a home health aid. She loved going out to dinner and spending time with her grandchildren, and she especially enjoyed going on cruise vacations with them. She also had fond memories of going fishing with her dad in Ireland. One of her favorite things to relax was having a cup of coffee and watching ghost stories on TV. Bernadette is survived by her husband, Vincent Millman; her son, David Millman (Donna); her daughter, Justina Millman; and her five grandchildren: Amanda Bestwick, Jarred Millman, Justin Millman, Shawn Dempsey and Javanni Millman. A visitation will be held Tuesday, June 29, 2021, from 1:30-3 PM at Strano & Feeley Family Funeral Home, 635 Churchmans Rd., Newark, DE 19702 followed by a service in celebration of Bernadette’s life at 3 PM. Burial will be private. In lieu of flowers, donations may be made in Bernadette’s memory to the Ronald McDonald House of Delaware, 1901 Rockland Rd., Wilmington, DE 19803. For directions or to send an online condolence visit www.stranofeeley.com

The family of Julianna Bernadette Millman created this Life Tributes page to make it easy to share your memories.

Send flowers to the Millman family.