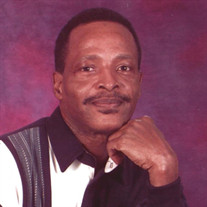 Leopold Williams was born to Alexander Williams and Ana Maria John De Williams on Sunday, May 24, 1936 in Jamaica. He was the second child of three siblings. He was affectionately known as a wonderful son, father, brother, uncle, friend and neighbor. He was often called Leopold, Lee, Pold, Luke and Mr. Williams. His greatest joy was loving and helping his family. Lee moved from Jamaica to Panama with his mother and older brother, Jorge. In the early fifties, when his mother immigrated to the United States, Lee took on the responsibility, along with Jorge, to help raise Jaime, their baby brother. Several years later, Ms. Ana was able to bring Lee and the entire family to the United States. Lee was gainfully employed in Panama. After coming to the United States, he worked at the Delaware State Hospital for eight years and later General Motors, where he retired after 30 years of service. In the early 80s, Lee dedicated his life to God. He was a faithful and devoted member of the St. Mary and St. Patrick Catholic Churches and he often attended worship and Bible study at Miracle Tabernacle Church of God in Christ. Lee was loved by both congregations. Lee always believed in the Lord but when he decided to truly dedicate his life to God, the transformation was evident to all. Lee literally put off the old and put on the new as it is commanded in Ephesians 4:22-24. Lee was preceded in death by his parents, Alexander Williams and Ana Maria John De Williams and his older brother, Jorge Williams. He is survived by his daughter, Joanne Williams; step daughter, Anayancy; brother, Jaime (Robin) Titus; sister-in-law, Carmen Williams; 3 grandchildren, 10 nieces, 2 nephews and a host of devoted family and friends. Relatives and friends are invited to the viewing on Saturday, October 16, 2021, from 9 to 10 AM at St. Mary’s Roman Catholic Church, 600 East 6th Street in Wilmington, where a Mass of Christian Burial will be celebrated at 10 AM. Interment will follow at Gracelawn Memorial Park.

Leopold Williams was born to Alexander Williams and Ana Maria John De Williams on Sunday, May 24, 1936 in Jamaica. He was the second child of three siblings. He was affectionately known as a wonderful son, father, brother, uncle, friend and... View Obituary & Service Information

The family of Leopold B. Williams created this Life Tributes page to make it easy to share your memories.

Leopold Williams was born to Alexander Williams and Ana Maria...

Send flowers to the Williams family.