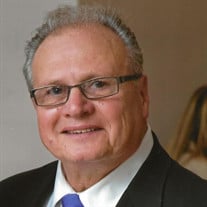 WEATHER UPDATE: Due to the snowstorm and hazardous driving conditions, Mr. Gasorek's service has been postponed until tomorrow. See service details below Nicholas P. Gasorek, Sr. of Bear, DE, passed away Sunday, January 16, 2022. He was born on September 10, 1943, in Scranton, Pennsylvania. Nick attended Thomas Jefferson High School in Elizabeth, New Jersey. He enlisted in the United States Navy in 1961 and was a member of the ship’s commissioning crew aboard the U.S.S. Enterprise (CVN-65), the first nuclear-powered aircraft carrier. Nick loved planes and directed them on the flight deck for the next four years. His service included the Cuban Missile Crisis in 1962. Nick served the country he loved and spoke about the men and the memories for the rest of his life. As part of the commissioning crew, he was honored as a Plank Owner. Nick worked as a skilled welder in father’s business, Metal Fabricating Company in Elizabeth, New Jersey. For the remainder of his career, he was self-employed. Nick married Carol Grossi in the summer of 1966. They met at the White Castle in Elizabeth, New Jersey where he offered to fix their car. They welcomed their first child Sandra and second child Nicholas, Jr. Nick was a family man and time spent with his children, grandchildren, nieces and nephews were priceless. He would call it “Making Memories” and whether at the beach, fishing with his son or carving a turkey at Thanksgiving, he cherished every moment. He loved to tinker and was a fixer of everything. There was no job too big to tackle, including rebuilding his first home from the studs. Fifties music and classic car shows were two things that gave Nick much happiness. He could be heard singing an Elvis song or reminiscing about the Corvette he owned on any given day. Cooking was a great interest and he excelled at it. Canning homemade chicken soup and gravy and passing it out to family and friends, was a regular occurrence. He loved reminiscing with old friends. Nick was always looking for ways to help people. Nick had countless legendary and now infamous saying’s like “Whose got it better than me” which always created much laughter among family and friends. He is with Jesus now and there is no more fitting quote. His favorite verse was John 3:16, “For God so loved the world, that He gave his only Son, that whoever believes in him may have eternal life.” The hope in this verse is what he would like shared most. Nick would want to be remembered as a man who loved the Lord. Nick is survived by his loving wife, Carol Gasorek; daughter, Sandra Gasorek; son, Nicholas Gasorek Jr. and wife, Noel; grandsons, Michael and Alex Gasorek; sisters, Merry Ellen Gasorek and Lelia Wilson; brothers and sisters-in-law, Gary and Sue Grossi and John and Renee Grossi; and nieces and nephews: Dana, Sara, Amanda, Steven and Lauren Grossi. He was preceded in death by his parents, Benjamin and Mary Gasorek; and nephew and niece, Jon and Joy Eichler. A visitation will be held Sunday, January 30, 2022, from 2-3 PM at Strano & Feeley Family Funeral Home, 635 Churchmans Rd., Newark, DE 19702 followed by a service in celebration of Nick's life at 3 PM. The service will be live-streamed at https://webcasts.lifetributes.com/1188844 In lieu of flowers, the family suggests donations in Nick’s memory to the Journey/Excel Program. This is a program at Red Lion Christian Academy servicing children with special needs. Make out the check to Red Lion Christian Academy, 1390 Red Lion Rd., Bear, DE 19701. Be sure to list “Journey/Excel Program” on the memo line. For directions or to send an online condolence visit www.stranofeeley.com

WEATHER UPDATE: Due to the snowstorm and hazardous driving conditions, Mr. Gasorek's service has been postponed until tomorrow. See service details below Nicholas P. Gasorek, Sr. of Bear, DE, passed away Sunday, January 16, 2022. He was... View Obituary & Service Information

The family of Nicholas P. Gasorek Sr. created this Life Tributes page to make it easy to share your memories.

WEATHER UPDATE: Due to the snowstorm and hazardous driving conditions,...

Send flowers to the Gasorek family.