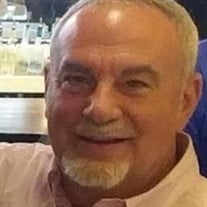 Nicky Mento passed away suddenly on October 22, 2021, at the age of 63. Nick was born on January 17, 1958, in West Chester, PA. He graduated from Downingtown High School in 1976. In 1982, he married the love of his life, Janet Reed. Nicky had a lifelong sales career in the floor covering business where he met numerous colleagues who became dear friends. Nicky’s greatest joy was to spend time with Janet, their family and friends. He was a gifted storyteller who made everyone laugh while sharing humorous stories of his life experiences. As a young boy Nick’s love of wrestling was deeply rooted by his great grandmother. This passion gave rise to one of his “famous stories” when, as a newlywed, he entered the ring as the wrestling character known as the “Chicago Crusher” and performed in matches for local charities. Nick loved spending time with Janet at the Jersey Shore. In their dating years they enjoyed time in Ocean City at the Reed’s family home. Once married, much of Nick’s time was spent with Janet creating a lifetime of memories with family and friends in Cape May. Nick loved grabbing a bite and a rum and coke with Janet, sharing stories and watching their beloved Phillies and Eagles at one of the local spots where they were known and loved by the staff. Nick’s love of family and friends reached far and wide, and he will be dearly missed. He is survived by his wife Janet Reed Mento; his father Joseph Mento and stepmother Dolly Mento; his sister Regina McGirk and her husband Dave; brothers Thomas Mento, Joseph Mento and his wife Nikki; stepsisters Kim Strengari, Lisa Bader and her husband Danny, Christina McManus and her husband Danny; brother-in-law Jeffrey Reed; sister-in-law Judy Reed-Green; brother-in-law David Reed and his wife Geri and many nieces and nephews that he adored. He is predeceased by his mother Eileen Higgins Mento and in-laws, Bill and Sunny Reed. A visitation for family and friends will be held on Monday, November 1st from 9:30am - 11am at Strano & Feeley Family Funeral Home, 635 Churchmans Road, Newark, DE 19702, where a memorial service will follow at 11am. Interment will be private. In lieu of flowers memorial contributions in Nick’s memory can be made to the Juvenile Diabetes Foundation at https://www2.jdrf.org/site/Donation2?idb=1260064094&df_id=2374&mfc_pref=T&2374.donation=form1 or JDRF, 200 Vesey Street, 28th Floor, New York, NY 10281.

The family of Nicholas J. Mento created this Life Tributes page to make it easy to share your memories.

Send flowers to the Mento family.