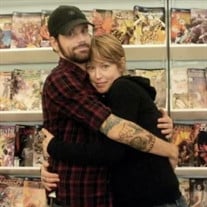 Elusive, passionate, grounded. Kind, patient, encouraging. Honest, generous, stubborn. Meticulous, chill, quiet unless there was something meaningful to say. Defying the odds, Pat was born to a mother with late-stage MS. Pre-teen Pat could be found in the cold dark hours setting up at and rummaging for robots at flea markets. In art class he produced dark, angelic imagery. Pat took himself to college, then to chemo & radiation when Hodgkins disease took over his lungs and heart. While working for the then-fledgling amazon.com Patrick got yelled at for other people’s mistakes, leading him to create the first Quality Assurance checkpoint for the picking department of PHL1. Later, Patrick asked the person who yelled at him if he could make her breakfast and in doing so captured her heart forever. Returning to his roots Titus, he started working at The Comic Book Shop in 2002. As Team Titus, with the woman who yelled at him, he took ownership of TCBS in 2010 with the express intent to make it a place where he would want to shop. He succeeded! Titus’ encyclopedic memory, enthusiasm for the bizarre, and adamant “It’s not the amount, it’s the attitude,” approach led The Shop to be internationally recognized for retailer excellence with multiple Eisner Award nominations. For the last two years he fought to strengthen his heart, which was failing from cancer treatment; the damage was more than Penn Medical specialists had ever seen. Patrick’s bright yet gentle spirit remains in all who knew him. His comic shop family will carry on to continue to realize his dreams of a nerd shop where all considerate folx are welcome. His smile was amazing! Predeceased by his mother, Rosalie. Survived by his stepmother, Bonnie & father, George; brothers, Steven & Kevin; step-brother, Kevin; niblings: Jocelyn, Jessica, Danielle, Stephanie, Morgan, Logan, & grand-niblings. Survived by wife, Sarah; rescue doghter, Heyzel, & rescue cats: Clawd, Hammy, & Rusty. Join us in celebrating Patrick Titus’ life on Sunday, May 1st from 12p-4p at The Comic Book Shop, 1855 Marsh Rd, Wilmington, DE 19810. Instead of flowers, kindly continue to share and support The Comic Book Shop! For those so moved, a Go Fund Me has been established to help TCBS continue to be awesome. "Organized by Bryan Davis: The Comic Book Shop and Titus' Legacy", http://GoFund.Me/E4FB30A1 Services and Burial are private. To send an online condolence, visit www.stranofeeley.com -Written by Sarah, inspired by one of Titus’ favorite sad-yet-beautiful comics, Daytripper, by Fabio Moon & Gabriel Ba.

The family of Patrick James Titus created this Life Tributes page to make it easy to share your memories.

Send flowers to the Titus family.