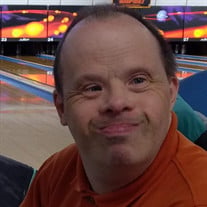 Paul Timothy Sutton, whose endearing smile could brighten any room he was in, spreading love and joy to family, friends, and others fortunate enough to know him, died Monday, January 4, 2021, following three months of illness. He was 57. The son of Charles F. Sutton Sr. and Mary Catherine “Miss Kitty” Sutton, Paul was born with Down syndrome on November 17, 1963—a time when life expectancy and educational and developmental opportunities for disabled people were significantly limited compared with today. From birth, however, his parents were strong advocates that Paul would have every opportunity to live a full and rewarding life. And they were active volunteers and participants in the Delaware Association for Retarded Citizens (D.A.R.C.) and other organizations as Paul attended Bush School for special needs students and, later, Wallace Wallin School. Two organizations were especially important to Paul’s development: Boy Scouts of America and the Special Olympics. In 1980, Paul joined Boy Scout Troop 60, which met at Bush School, and rose through the ranks under the guidance of Scoutmaster Charles Young, and with support and encouragement from his father, who served as assistant scoutmaster. In 1988, Paul earned the highest award in scouting as an Eagle Scout. His special service project involved growing a vegetable garden in Bellevue State Park for the Daughters of Charity. Vegetables grown in the garden were distributed by the Catholic charitable organization to feed the hungry and poor in the city of Wilmington. Paul’s involvement with Delaware Special Olympics, founded in 1971, spanned most of his life. And he participated in the whole wide world of sports over the years, from cross country and Alpine skiing to track and field and tennis, to bowling, basketball, and bocce, among others. He competed in the New Castle County and Delaware State Special Olympics bowling tournaments as recently as January 2020. And he competed in the basketball and bowling tournaments in 2019, the last year they were held before the COVID-19 pandemic forced cancellation of all sports. Faith and family have also been deeply important in Paul’s life. He grew up attending Emmanuel Orthodox Presbyterian Church with his family in Wilmington, and until the pandemic, loved going to church and, especially, singing hymns. Paul’s faith in God was an inspiration to those who knew him, and a comfort now to his family and friends. In recent years, Paul’s family has also included the staff and roommates of the group home where he has lived in Newark, run by Community Systems, Inc. The nonprofit organization, which operates in Delaware and three other states, is dedicated to helping persons with disabilities find happiness in their own homes, in their personal relationships, and as contributing members of their community. Until the pandemic closed it down, Paul participated in a day services program run by Easterseals in Newark for adults with intellectual and developmental disabilities. Paul Timothy Sutton is survived by his brother, the Rev. Charles F. Sutton Jr. and wife, Mary; and three sisters: Carol Witkos and husband Fred; Cathy Croft and husband Jack; and Mina Adamovage and husband Marty. He was predeceased by his father and mother, and by older brother, William. Paul is also survived by 10 nieces and nephews, and 19 great-nieces and great-nephews. Donations can be made in remembrance of Paul Timothy Sutton to Community Systems Inc., designated to go to CSI Delaware, or Delaware Special Olympics. Services will be private. To send an online condolence, visit ww.stranofeeley.com

Paul Timothy Sutton, whose endearing smile could brighten any room he was in, spreading love and joy to family, friends, and others fortunate enough to know him, died Monday, January 4, 2021, following three months of illness. He was 57. The... View Obituary & Service Information

The family of Paul Timothy Sutton created this Life Tributes page to make it easy to share your memories.

Paul Timothy Sutton, whose endearing smile could brighten any...

Send flowers to the Sutton family.