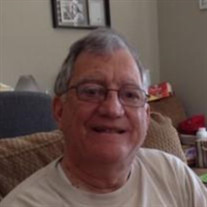 Philip “Phil” Emanuele, age 74, passed away peacefully on Wednesday, December 2, 2020. Phil was raised in Belleville, NJ. He later moved to the Jersey shore and just two years ago, moved to Delaware to be close to his daughter and her family. He played the drums in his high school band and then later formed a jazz band of his own with friends. Before Phil became a realtor later in life, he was the co-owner of a bowling alley. Owning and running his own business was always a dream of his. Phil was a loving father, grandfather, brother, and friend. For many reasons, he will be missed dearly…and also for many reasons, memories of Phil will put smiles on the faces of those he knew. Phil enjoyed swimming, walking, listening to jazz, tracking the Dow Jones Industrial Average, and eating dinner with friends and family. He loved antique cars, unique clocks, corny dad jokes, documentaries, and the Weather Channel. Phil is predeceased by his parents, Joseph and Genevieve Emanuele, his sister, Lois, and his brother, Joseph. Phil is survived by his son, Robert (Seattle, WA), Robert’s wife, Hillary, and their sons, Jonas and Keltan; and his daughter, Jessica Ryan (Wilmington, DE), Jessica’s husband, Stephen, and their children, Francis, Collette and Julian. Phil is also survived by his sister, Delores Macaluso, and her husband, Joseph, along with numerous cousins, nieces, and nephews. Services will be private due to COVID-19 restrictions. In lieu of flowers, memorial donations can be made to St. Jude Children’s Research Hospital at www.stjude.org/donate. To send an online condolence please visit www.stranofeeley.com Strano & Feeley Family Funeral Home 302-731-5459

Philip &#8220;Phil&#8221; Emanuele, age 74, passed away peacefully on Wednesday, December 2, 2020. Phil was raised in Belleville, NJ. He later moved to the Jersey shore and just two years ago, moved to Delaware to be close to his daughter... View Obituary & Service Information

The family of Philip A. Emanuele created this Life Tributes page to make it easy to share your memories.

Send flowers to the Emanuele family.