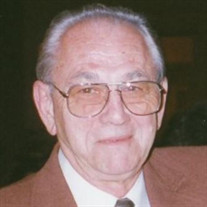 Richard Owens, age 91, of Wilmington, DE, passed away peacefully on May 7, 2021, at home surrounded by family. Richard was born in Zion, Maryland to Avery and Ethel McKinney Owens on April 26, 1930. After being raised there, he built his first house less than 2 miles from Zion after he got married and left military service – living 52 years of his life within a 1.5-mile radius. He served in the Army during the Korean war traveling to Germany as a Binocular Repairman. An electrician by trade, Richard worked for C. Paul Nickle for 27 years. He was one of the first employees, starting as an electrician, and finished his career there as Superintendent. You have likely been in a building in northern Delaware that Richard “wired.” Following his time as an electrician, Richard started and ran his own home remodeling business, MaRich Inc. Richard enjoyed working with his son, also an electrician, throughout his career. Richard played the organ in his early life and had a great appreciation for music – he especially loved gospel, jazz, country, and theater organ music. For many years, Richard was “Chairman of the Board” of a group of “breakfast guys” at Mary’s Country Kitchen in Stanton where many world problems were solved. After his retirement in 1998, he enjoyed traveling with his wife and following the activities of his grandchildren and great-grandchildren. Richard is survived by his wife, Mary Owens; his son, Wayne Owens (Lynn); his daughter, Rene Pearson (Steve); stepchildren: Kim Guillen (Rob), Charles Clarke (Gloria), and Michael Clarke (Dawn); sister-in-law, Kitty Owens; 13 grandchildren; and 10 great-grandchildren. He was preceded in death by his parents, Avery & Ethel Owens; and his brother, Alfred Owens. A viewing will be held Friday, May 14, 2021, from 10-11 AM at Strano & Feeley Family Funeral Home, 635 Churchmans Rd., Newark, DE 19702 followed by a service in celebration of Richard’s life at 11 AM. Burial will be private. In lieu of flowers, the family is requesting that donations be sent to the American Diabetes Association (www.diabetes.org or PO Box 7023, Merrifield, VA 22116-7023) or a charity of your choice. To send an online condolence, visit www.stranofeeley.com

Richard Owens, age 91, of Wilmington, DE, passed away peacefully on May 7, 2021, at home surrounded by family. Richard was born in Zion, Maryland to Avery and Ethel McKinney Owens on April 26, 1930. After being raised there, he built his first... View Obituary & Service Information

The family of Richard Owens created this Life Tributes page to make it easy to share your memories.

Send flowers to the Owens family.