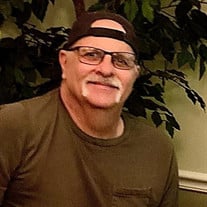 Richard F. Pilichowski (Rick) age 67, of Wilmington, DE, gained his wings on Wednesday, September 29, 2021. Family was everything to Rick. He had a heart of gold and enjoyed the simple things in life, from barbecues and beach trips to fishing, and time at home with his family. You could always find Rick either in the kitchen or in the woods. He loved to cook constantly and go on hikes with his German Shepherd. And, no matter his location, he would always be jamming to some classic rock. He enjoyed playing Santa Clause for his many nieces, nephews, and grandchildren at his yearly Christmas Eve party. Rick attended Wilmington High School and won the State Basketball Championship with the class of 1972. He acquired the nickname Pistol Pete for his moves on the court and received a college scholarship. After attending college, he later became a youth coach at various local schools. He was extremely passionate about his service with the U.S. Wardogs Association and Paws for People. He attended countless events and fundraisers and visited hospitals to perform pet therapy. He received multiple awards, including the Animal Hero Award and Distinguished Service Award, for his continued dedication. Rick is also a published author. He wrote a book, titled TEAM, about the unique bond between a soldier and his service dog. He traveled to book signings with his dog, which, in turn, would also raise money for the organizations he served. Richard was a beloved husband, father, grandfather, uncle, and friend to many. He is survived by his wife of 45 years, Margaret (Nasatka); daughters Krista (Michael) and Stephanie (Stanley); granddaughters Amelia and Paige; and brother Henry. He was preceded in death by his parents, Joseph and Hedwig. A visitation will be held Thursday, October 7, 2021, from 9:30-11AM at Strano & Feeley Funeral Home, 635 Churchmans Rd., Newark, DE 19702 followed by a service in celebration of Rick’s life at 11 AM. In lieu of flowers, donations may be sent in Rick’s memory to the U.S. Wardogs Association, 1313 Mt. Holly Rd. Burlington, NJ 08016. Burial will be private. To send an online condolence, visit www.stranofeeley.com.

Richard F. Pilichowski (Rick) age 67, of Wilmington, DE, gained his wings on Wednesday, September 29, 2021. Family was everything to Rick. He had a heart of gold and enjoyed the simple things in life, from barbecues and beach trips to fishing,... View Obituary & Service Information

The family of Richard F. Pilichowski created this Life Tributes page to make it easy to share your memories.

Send flowers to the Pilichowski family.