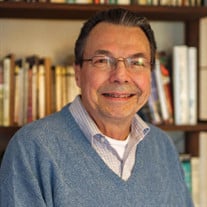 Robert Charles "Bob" Kaatz of Wilmington went home to be with the Lord Wednesday, September 30, 2020. Born into a farm family of six children in Michigan on June 18, 1940, Bob attended the University of Michigan for one year, then spent four years in the U.S. Navy, mostly on ships. It was there where he contracted mesothelioma unknowingly. More importantly, he was introduced to salvation through Jesus Christ by a fellow sailor. It changed his life. After the Navy, he attended Bryan College for two years, where he met his wife, Dorothy (Dottie). He then transferred to Michigan State University to finish a degree in electrical engineering. Feeling the call of God to missions, he earned a four year master of theology degree at Dallas Theological Seminary. From there, he and Dottie went to Germany in 1973. Bob became very proficient in German and spent 16 years teaching at a German Bible institute and helping a team to found two German Evangelical Free Churches which are still prospering. In 1989, he and Dottie returned with their three daughters to the U.S. Bob became headmaster at two Christian schools over six years, then was employed by Bank of America before retiring. His greatest joy was teaching the Bible, which he did at Bible Fellowship Church of Newark for many years, also serving as an Elder and working part time in the church office. He and Dottie often sang duets in church, traditional hymns much loved by the older generation. Bob was outgoing, relentlessly cheerful, and loved to laugh. Indeed, he was known for his loud laugh. He always had a willingness to help others, whether that included help with day to day needs or with spiritual guidance. He had a sharp intellect and spent many hours reading, having amassed a large library of books. His daughters recall him often sitting at his desk, reading and writing. He loved music and derived much joy from listening to his records and CD’s over the years. In 2016, he began to succumb to his mesothelioma which had been hiding all those years. He died on September 30, 2020. He leaves behind his wife of 55 years, Dottie; daughters: Chris Friesen (Darrell) with three married children; Libby Foester (Terry) with four children; and Joanna Champney (Ryan) with two children. He is also survived by his grandchildren: Kaily, Taylor, Sierra, Ruby, Eli, Eden, Finn, Silas, and Mercy. Bob is now rejoicing in the presence of the Savior he loved and served for so many years. A visitation will be held Monday, October 12, 2020, from 10-11 AM at Bible Fellowship Church, 808 S. Old Baltimore Pike, Newark, DE 19702 followed by a service in celebration of Bob’s life at 11 AM. He will be buried at the Delaware Veterans Cemetery. In lieu of flowers, donations may be made to Bible Fellowship Church or the Gideons International. For expanded obituary, directions or to send an online condolence visit www.stranofeeley.com

Robert Charles "Bob" Kaatz of Wilmington went home to be with the Lord Wednesday, September 30, 2020. Born into a farm family of six children in Michigan on June 18, 1940, Bob attended the University of Michigan for one year, then spent four... View Obituary & Service Information

The family of Robert Charles Kaatz created this Life Tributes page to make it easy to share your memories.

Robert Charles &quot;Bob&quot; Kaatz of Wilmington went home to be with...

Send flowers to the Kaatz family.