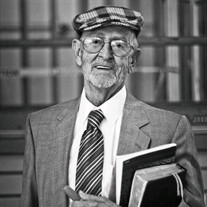 Robert William Powell (October 14, 1927 – November 8, 2021) Dad's faith, at last, became sight, at 2:57 a.m. November 8th. He was preceded in death by his parents, Arthur Thomas Powell and Esther (Naeher) Powell and his dear wife, Esther (Miles) Powell. He and mom celebrated 63 years of marriage. He is survived by his sister, Marjorie (Powell) Posten, of Orlando, FL; Son Kurt and wife, Alice Powell of Nixa, MO; Son Bryan and wife Patricia Powell of Dallas, GA; Son Lyle and wife Debbie Powell of Altamonte Springs, FL; Daughter Virginia (Powell) and husband Rev. Richard Vaughn of Mount Joy, PA; and Daughter Sarah Powell of Lancaster, PA along with 11 grandchildren and 34 great-grandchildren and nieces and nephews. He was born at home on 1602 Moltke Avenue, Scranton, PA. on October 14, 1927. He grew up at a time when the sheeny, ragman and scissor man, would ply their trades on his neighborhood street; when you could leave cash on the kitchen table, in your unlocked house, for the grocery man who would deliver and put away your food in the pantry or icebox. Dad looked forward to the meat man who’d slice off a sliver of lunch meat for him and the iceman who would chip off some ice to give to him for a summertime treat. His pastimes included stickball, hunting, along with his two-lifetime hobbies of fishing and blueberry picking. I can’t forget to mention his love of dogs. It started with Daisy Mae to all the way to Missy – 10 of them in all. Plus a few grand-dogs thrown in. He never met a dog he didn’t like. After graduating from Scranton Tech High School, he had to answer the question, "now what?" He joined the Navy in 1945 but only served about a year, and was medically discharged. With his father's backing, he opened "Powell's Market" and ran that for a while. He and Esther started their life in Corning, NY where he worked for Corning Glass Company. In January of 1953, he began working for General Motors. There he spent 38 years, 15 of which were in the body shop, then on to less demanding jobs until his retirement in 1980. He was committed to providing for the family even if it meant working 2 or more side jobs or even working 6 months with a slipped disc. He wanted mom to stay home and raise us. He was old-fashioned that way. While he was busy working, serving in the church and bringing up his kids, he found time to "putz" around his workshop, sing with the “Barbershoppers”, help mom can fruits, jellies, and jams, garden, hunt, fish, berry pick, work crosswords, puzzle out cryptograms, read, travel and even bake a pie now and again. He just loved Christmas and it wasn't Christmas in our house until the American Flyer train and yard were set up. The annual Welsh Griddle Cookie baking tradition will not be the same without dad there to direct it. His graduation is both a sorrow and a blessing. The Lord he served for almost 70 years, called him Home where now he has laid his burden down and worships face to face. Over these many decades, some of the ways he served his Lord was as a laborer on a short-term missionary trip to Columbia, deacon, choir member, lay-music director; he sang in quartets, duets, solos; was a deaf interpreter, and was the First Baptist Church historian. He participated in church work-days and did whatever needed to be done. He was still pointing others to Christ during his radiation treatments. He loved his Lord and Savior. He was a powerful example to others, especially to his children and grandchildren. He took care of his father in his dying days and served my mother over many years as her health declined. He believed a man should treat his wife like a queen. He did just that for mom. He was extremely proud of his family and was always ready to tell about his many grandchildren’s talents, gifts, and abilities. He took great pride in their service to this country, and for their various ministries as they too serve the Lord. He was a good friend, hard worker, faithful husband, strong example, and committed servant of the Lord. He left a remarkable legacy. For those who wish to pay their respects, there will be a viewing at Strano & Feeley, 635 Churchman's Road, Newark, DE. There will be a public viewing, Wednesday, November 17, 2021, from 11:00 AM - 12 PM; Service following officiated by his pastor, Alan Gardner, Pastor of Bible Baptist Church, Leola, PA. He will be laid to rest at Gracelawn Cemetery. In lieu of flowers, donations can be made to the Organ Fund of Bible Baptist Church, 12 W Main Street, Leola, PA 17540.

The family of Robert William Powell created this Life Tributes page to make it easy to share your memories.

Send flowers to the Powell family.