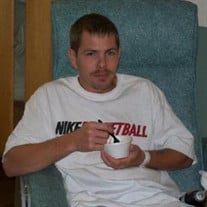 Robert Charles Yingling, a loving father, brother, and son of the Lord, died unexpectedly at the age of 36 in New Castle County, on September 2, 2020. Robert is survived by his parents, Buddy Yingling and Priscilla Transue; his children Autumn, Aubree, and Haylee Yingling; his Sisters, Joanna, Katelyn, Lisa, and Nicole; his Nieces and Nephews, Anthony, Eddie, Christopher, Courtney, Ryan, Natalia, and Jack; his Grandmother Maggie Rife; his cousins: Faith Rice, Ron, Sandy, Michael, Allie, and Gunner Yingling; Morgan, Rachel, and Luke Rife; Rebecca Dickerson, Matthew Bradley and Nathan Mullins; His uncles Ronald Yingling Sr., Chuck and Dale Rife, Ernie, Robert, Steven, and Keith Transue; and his aunts Diane Bender, Patricia Kalambacher, Marie Yingling, Roberta Fulk, Cindy Harder, Janet Kennedy, Patricia Transue; and his many loving friends. Robert is predeceased by his Grandparents, Lola and Robert Transue, and Charles Rife Sr. Robert was born on October 9th, 1983 to Buddy and Priscilla Yingling. Robert studied automotive technologies in Del-Castle when he attended High School. His extra-curricular interests included baseball, martial-arts, and wrestling. Robert was an astute enthusiast and always knew the right tool or had a friend who was the right guy for the job. Robert eventually became a Commercial Driver, but along the way he took occupation in various forms. Robert had dabbled in small electronics repair for a time. He once worked as a Quality Control Tech. in a SCUBA production facility that sent NASA proposals for Life Support Systems. Robert explored the world of industrial wastewater treatment for a few years as a Sewer Fabrication Specialist. He is responsible in-part for the infrastructure handling other people’s waste well into the next century from New York to North Carolina. Robert Charles Yingling had an inherent aptitude for understanding. He was empathetic and showed sympathy for those less privileged. Robert was known for being there for others more than he was for himself. He was a lover. And he loved to laugh. Robert’s jovial heart and joyful laughter had a way of bringing light to a situation where perspective was seemingly lost. His presence is and will be sorely missed in perpetuity. Robert was saved when he 16 years old and has remained devoutly loyal, reading the bible and spreading the word of the Lord ever since. Robert Yingling had a capacity for care not often encountered. He always wanted to know whether he could help, and he was always quick with a joke. Robert enjoyed fishing, farming a garden, riding motorbikes, working on engines, and above all else, he just enjoyed the time he got with his family. To quote a lifelong friend of Robert’s, “More than once he inspired me to do better”. A visitation will be held Monday, September 21, 2020, from 9:30-11 AM at Strano & Feeley Family Funeral Home, 635 Churchmans Rd., Newark, DE 19702 followed by a service in celebration of Robert’s life at 11 AM. Burial will be private. For directions or to send an online condolence visit www.stranofeeley.com

Robert Charles Yingling, a loving father, brother, and son of the Lord, died unexpectedly at the age of 36 in New Castle County, on September 2, 2020. Robert is survived by his parents, Buddy Yingling and Priscilla Transue; his children Autumn,... View Obituary & Service Information

The family of Robert Charles Yingling created this Life Tributes page to make it easy to share your memories.

Robert Charles Yingling, a loving father, brother, and son of...

Send flowers to the Yingling family.