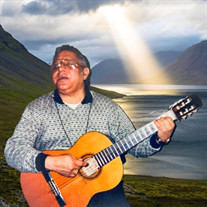 Roberto Elmer Martínez-Ortiz, 78, entered into the loving arms of his Savior on December 24, 2020, in Wilmington, Delaware. From his birth in Yabucoa, Puerto Rico on August 9, 1942, to his promotion to glory on December 24, 2020, he touched the lives of those around him. Roberto’s passion was music. He was a percussionist and a backup singer in the orchestra Copacabana de Humacao, Puerto Rico. In 1975, Roberto and his wife Carmen gave their lives to the Lord, and immediately they dedicated themselves to worshipping God and eventually becoming ministers of music for over 40 years. Roberto was a jack of all trades. In his younger years he was a machine operator at a sugar refinery. In Spanish, his position was known as an “azucarero.” In addition, he worked in mechanics and welding. Roberto, lovingly known as “Pupo,” was also well-known for being a mechanic. He owned his own body shop—Radiadores Pupo (Pupo’s Radiators). Lastly, Pupo was also distinguished for selling Puerto Rican Creole cuisine. His hobbies included playing the guitar, drag racing, cooking, traveling, amateur wrestling, boxing (ranked: golden gloves), and making people laugh. Some of his favorite moments were spending time with his family, and moreover developing a lasting and loving relationship with Christ being the center. In the last years of his life, he became a true prankster. Pranking everyone he could and bringing godly joy to their lives. Roberto was a true champion and a faithful believer who gave his life entirely to God. Roberto was a loving father, proud grandfather, an endearing brother, a caring uncle, and a wonderful friend to many. He will be missed, however never forgotten. Roberto leaves to his memory his children, Samuel Martínez-Andújar, Roberto Martínez-Andújar, Carmen Martínez-Andújar, and Ruth Martínez-Andújar; one sibling, Susana Morales; eight grandchildren, Claribel Martínez-Ortiz, Samuel A. Martínez-Ortiz, Jennifer Martínez-Ruiz, Elmer Roberto DeLeón-Martínez, Joshua López, Robert A. Martínez-Ruiz, Milca Lian DeLeón-Martínez, and Ariana M. Rosa; 9 great children and one on the way. Finally, Roberto leaves to his memory a host of loving relatives and dear friends. Viewing services will be held on Saturday, January 2, 2021, from 1:00 p.m. to 3:00 p.m. at Fuente de Agua Viva, Inc. Church located at 1010 Anchorage Street, Wilmington, DE 19802 with Pastor José Andújar officiating. The Martínez family would like to extend our gratitude to so many individuals who demonstrated attentiveness and loving care. In lieu of flowers, memorials may be made in Roberto’s name to the Strano & Feeley Family Funeral Home.

The family of Roberto Elmer Martinez-Ortiz created this Life Tributes page to make it easy to share your memories.

Send flowers to the Martinez-Ortiz family.