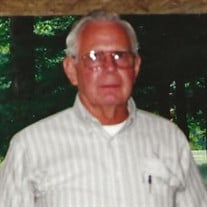 Ronald “Ron” J. Spangler passed away on December 3, 2021, in Union Hospital of respiratory complications following a brief illness. Born in Indiana, Pennsylvania, Ron began his working career as a truck driver and a mechanic. This early choice could prove to be the spark that kept Ron employed in the mechanical field for his whole life. Ron met the love of his life, Lucy Kerr, and they wed in 1956. Over the next ten years, Ron and Lucy forged a life together, surrounded by family and friends. During this time, Ron served in the United States Army as a Radar Specialist, stationed for a short time in Germany. In 1966, Ron and Lucy moved to Newark, Delaware after Ron accepted a position at the Chrysler Assembly Plant where he remained employed for the next 35 years. Ron was a very dedicated employee, never missing a single day of work. Shortly after their move to Delaware, Ron and Lucy welcomed their son, Kevin. As Kevin aged, Ron shared his love and knowledge of mechanics with him. They would spend many hours together repairing vehicles and attending auctions and car shows. Ron enjoyed an active retirement that included frequent trips to his native Pennsylvania. He continued his passion for working on engines, spending many days refurbishing, repairing and selling many brands of lawnmowers. Ron was preceded in death by his wife, Lucy and his mother, Elizabeth Spangler. He is survived by his son, Kevin; Kevin’s girlfriend, Ann Marie Miller; Ann Marie’s sister, Sue Ann Miller; sister-in-law, Annabelle Spangler; and many nieces and nephews. A visitation will be held Thursday, December 30, 2021, from 9:30 – 11:00 AM at Strano and Feeley Family Funeral Home, 635 Churchmans Road, Newark, Delaware 19702. Burial will take place at Delaware Veterans Cemetery at 1 PM. In lieu of flowers, the family suggests contributions to your favorite charity in Ron’s memory.

Ronald &#8220;Ron&#8221; J. Spangler passed away on December 3, 2021, in Union Hospital of respiratory complications following a brief illness. Born in Indiana, Pennsylvania, Ron began his working career as a truck driver and a mechanic. This... View Obituary & Service Information

The family of Ronald J. Spangler created this Life Tributes page to make it easy to share your memories.

Send flowers to the Spangler family.